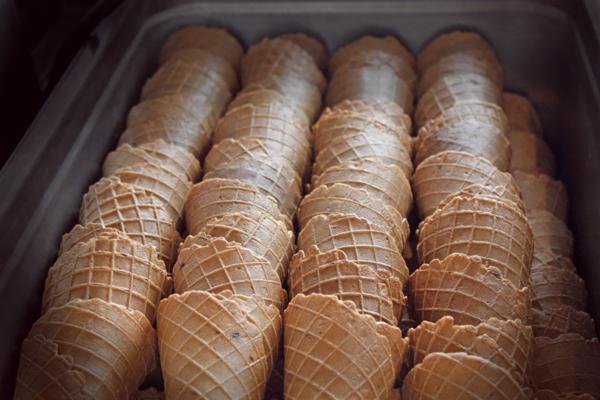 Being gluten intolerant can mean you have to forego a range of flavoursome foods – but now you can take waffle ice cream cones off the list.

Thanks to local ice cream chef Giapo Grazioli, people with an intolerance or sensitivity to gluten can now enjoy their favourite summer treat safe in the knowledge the cone’s going to be tasty and will have no adverse effect.

Just in time for summer, Giapo from Giapo Haute Ice Cream in Auckland has developed a great tasting gluten-free waffle cone made from natural and organic ingredients which can be baked and hand rolled.

Grazioli’s cone is made from natural ingredients egg white and almond meal. He believes it is the first gluten-free cone of its type in the world.

Gluten intolerant or sensitive ice cream lovers have until now had to satisfy their craving by eating their favourite treat from either containers or cones that are less tasty.

Now, following months of research, Grazioli has developed a recipe that can be rolled in to shape without breaking and baked fresh in front of customers twice daily at his Queen Street store.

“There are gluten free cones on the market but they are a poor substitute because the flavour is compromised in order to make the recipe work,” Grazioli says. “By working only with the finest real ingredients we have been able to create a mixture that is flexible and also tastes great.”

While studying food science at AUT in 2011 Grazioli had researched ways to substitute other ingredients for gluten. Over the past two months Grazioli and his team tried at least a dozen different recipes.

His breakthrough came about earlier this year as he analysed a range of ingredients for their elastic properties.

“We found the solution in a cooked egg white and almond meal combination,” he says. “The protein in egg whites unfolds when cooked through a special process called pyrolytic reaction.

“The reaction mimics the effect on glutinous proteins like when you’re kneading dough,” Grazioli says. “In this way we create a rich and elastic mixture that ensures the cooked cone doesn’t break like a thin biscuit.”

Importantly, the egg white and almond meal combination can be used as a substitute for flour in any recipe to make it gluten free Grazioli says.

For the finishing touches the cones are hand rolled and coated on the inside with Grazioli’s signature dark chocolate.

“It’s an ambition of mine to profile New Zealand innovation and creativity. Being able to provide a gluten free cone that tastes delicious makes me feel really proud of my team,” Grazioli says.

The cones are now available at Grazioli’s Giapo ice cream store on Queen Street in Auckland at the same price as a regular waffle cone.

About Giapo Grazioli:
Giapo Grazioli is the head chef and patron at Giapo Haute Ice Cream and a leading authority on ice cream, his store being ranked the 10th best outside Italy* in 2014. In January 2015 Giapo has been invited by the Italian Trade Agency to attend SIGEP (http://www.sigep.it/), the biggest artisan gelato and pastry fair in the world. Giapo opened his store in 2009 and its staff are committed to changing the way people experience, see, feel and eat ice cream. Giapo Grazioli’s dream is to inspire the world to come and experience the beauty New Zealand has to offer through an ice-cream lens. Giapo Grazioli's vision has made Giapo Haute Ice Cream one of the most popular hospitality businesses in the country currently serving several thousand people a week.

Giapo Haute Ice Cream is at 279 Queen Street Auckland next to the Civic Theatre. The store is open from 12.30pm until the ice cream is sold out at about 10.30 at night.
*http://www.dissapore.com/grande-notizia/migliori-gelaterie-del-mondo/