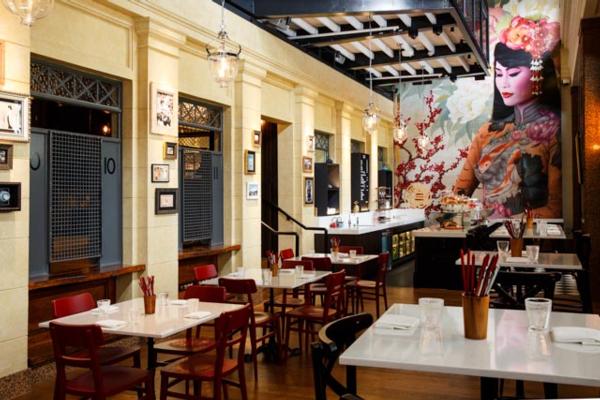 His multi-awarded Japanese restaurant on SKYCITY Auckland’s Federal Street has been much more than simply a resounding success.

Madame Hanoi Bar & Bistro in the Adelaide Casino is the Kiwi restaurateur’s latest venture in to Asian food. The restaurant is open from breakfast and the menu marries the sophistication of French food with the punchy flavour and vibrancy of Vietnamese cuisine.

Nic’s acknowledged passion for Asian cuisine is showcased in a menu featuring a contemporary take on the French influence on Vietnamese food in Indochina during the 19th Century.

The restaurant also features a South Australian-focused list of more than 100 different  wines as well as 14 draft craft beers. A focus on single origin coffee, including bespoke cold drip Vietnamese coffee at the restaurant’s espresso-bar entrance complements the breakfast menu which includes macarons and French pastries.

With his background firmly rooted in the highly technical skills of Japanese cooking, Nic Watt has always been a passionate lover of Asian cuisine. On visiting Vietnam on honeymoon with his wife Kelly, Nic was instantly drawn to Vietnamese food with its heavy influence of French colonialism.

“From baguettes to coffee, the French influence has been far-reaching on what was already a gastronomically renowned nation,” Nic says.

Vietnam was a French colony for nearly a century from 1859. The indelible mark of the French influence remains on everything from elaborate architecture to street names and most notably, the cuisine.

“The European influence gave rise to an entirely new taste to traditional Vietnamese food, while also showcasing the way the Vietnamese have put their own stamp on food introduced by the French.

“This is what we are trying to achieve at Madame Hanoi where we have dishes that are both uniquely Vietnamese and unmistakably French sitting alongside those that harmoniously unite the two,” Nic says.

Notwithstanding its heritage aspects, cutting edge architecture detail merges with the framework of the past while a bespoke two-storey high mural by local artist Emma Hack adds depth and dimension to the space.

Madame Hanoi Bar & Bistro is open from 7am Monday to Friday and from 11am in the weekends. Find it at Adelaide Casino, North Terrace, Adelaide.

About MASU by Nic Watt
Celebrated New Zealand restaurateur Nic Watt brings his passion for flavour and dedication to detail to Auckland with MASU, the Japanese robata restaurant and bar in Federal Street at SKYCITY. The restaurant draws on Nic’s exceptional pedigree, experience he has gained from running highly successful robata restaurants in London, Macau, Hong Kong and America. Robata is contemporary Japanese cuisine cooked over a charcoal grill where theatre and ambience are as much of the process as the eating.  MASU’s philosophy is based on the enhancement of natural ingredients, letting the food and the presentation speak for themselves while at the same time making each dish taste sensational. In January 2015 Nic opened his second restaurant, Madame Hanoi Bar & Bistro in Adelaide, Australia which specialises in French-Vietnamese fusion cuisine.
More at www.masu.co.nz