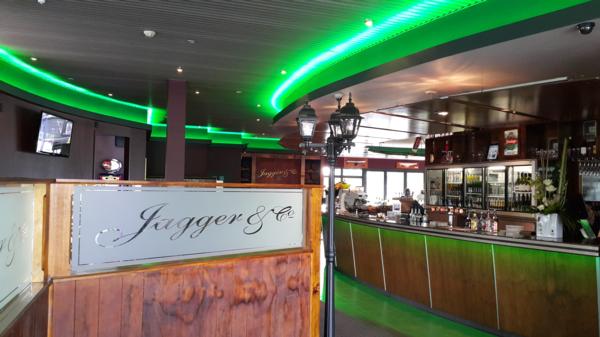 The newly renovated Jagger & Co Restaurant & Bar in Kaiapoi, opened it's doors early November 2014 and is riding a huge wave of success. Talking with one of the owners and venue manager Kevin Johnson, he said that the doors of the business were closed before they brought it in late September 2014. His team spend about 5 weeks rebranding the place and from the comments so far it looks like they nailed it.

Asked  where the name came from, Kevin explained that their research into Kaiapoi's history revealed that Henry Jagger had built the first brewery in Kaiapoi in 1862, he later sold it to Henry Edgar and in 1903 there was a suspicious burglary and fire at the brewery. It turned out that the company book keeper Mr Frank Hempleton, had been stealing from the business. Kevin show's me the replica newspaper clippings on the wall that explains the crime. Funny enough they even have Barrel Thief as there house wine at the bar.

The staff at Jagger & Co work hard to make everybody's experience the best it can be and Head Chef's Tracey's menu and food has certainly helped build the popularity of the Restaurant. Kevin jokes that he wanted the bar and food mix of the business to be 50/50 but the true of the matter is that the food is kicking the bar trade 60/40. Kevin smiles at Tracey and says 'but I'm not giving up.'

The success of the Restaurant and Bar to date has been put down to hard work by Kevin and his team, they take peoples comments very seriously, as a visit to there 'Tripadvisor' page will show. Jagger and Co has climbed 7 rankings so far this year, Kevin says he takes every review on board and tries to reply to each one personably. He has even used his competitors review to help train the staff. 'I love that people take the time to review us and I think it is an important part of our success so far' says Kevin. Ask him if he is happy yet and he will tell you that he belives they can be the number 1 ranked restaurant in Kaiapoi on Tripadvisor soon.

If you haven't visited Jagger & Co yet, make it a priority. There is always something going on like: