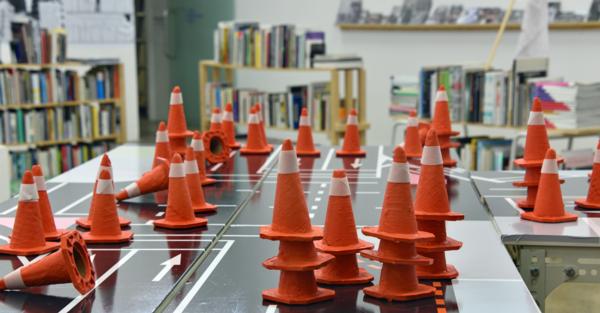 It's edible art in a cone

Invited guests at K Road’s Artspace Gallery were treated to much more than art at a private exhibition in Auckland last night (25 February) – edible miniature road cones bursting with bespoke ice cream as part of a work.

Guests comprising Artspace benefactors, supporters and friends were invited to disassemble the work, removing the cones to have them filled with Giapo’s creation - a special K-Road inspired cherry plum ice cream flavour.

According to Giapo the artwork represented the “intersection between street art and edible art”.

Giapo says one of the key ideas behind the piece was change. “K-Road is a place of change at the moment - both in a physical and a social sense.  We wanted to capture that turbulence and used the safety aesthetic of road cones to help to represent that,” he says.

The transient nature of the edible installation also reflected the state of flux that the piece communicates says Giapo.

Giapo says the artwork was also a something of a shrine to the hot summer of 2014/2015. “Ice cream is so much a part of the Kiwi summer and we wanted to engage people with the creativity that can accompany food.”

Giapo and Popovic have been collaborating since 2014 after Popovic graduated in 2012 from University of Auckland Elam School of Fine Art. Popovic’s speciality is the cross-over between art, object and product design.

About Giapo Grazioli:
Giapo Grazioli is the head chef and patron at Giapo Haute Ice Cream and a leading authority on ice cream, his store being ranked the 10th best outside Italy* in 2014. Giapo opened his store in 2009 and his staff are committed to changing the way people experience, see, feel and eat ice cream. Giapo Grazioli’s dream is to inspire the world to come and experience the beauty New Zealand has to offer through an ice-cream lens. Giapo Grazioli's vision has made Giapo Haute Ice Cream one of the most popular hospitality businesses in the country currently serving several thousand people a week.

Giapo Haute Ice Cream is at 279 Queen Street Auckland next to the Civic Theatre. The store is open from 12.30pm until the ice cream is sold out at about 10.30 at night.