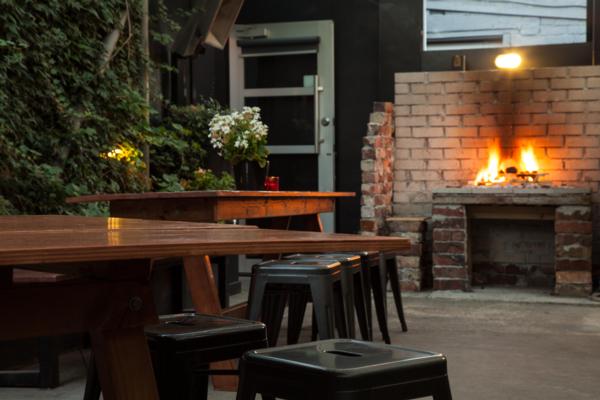 Great feasts always linger in the memory. The mental image of a fully laden table groaning under the weight of a huge roast and freshly baked seasonal vegetables is a durable one.

Feasting is a trend in New York, Sydney and in many global centres. And happily, now in Auckland’s Mt Eden.

Neighbourhood eatery Molten is embracing the trend with its new feasting menu where lashings of shared food “deliver a more rounded social experience to dining out”.

“The food is in place in the middle of the table. Plates are passed between diners and people serve themselves,” says Nielsen. “It’s like being at home and it’s an atmosphere we strive to encourage at Molten.”

Taking its inspiration from such lauded establishments as Sydney’s Porteño and St John in London, Molten’s shift in dining focus sees larger cuts of meat – and on occasions entire animals – gracing the menu.

“Sharing food promotes interaction between guests and provides another level of experience for the diner, bringing a more social element to the table (pun intended). We just think it’s a very pleasant way to dine.”

That’s not to say the new menu neglects those who prefer á la carte – all items on the feasting menu are available individually. But you do need to provide some days’ notice for a few of them, the whole spit meat dishes and whole baked fish.

Nielsen says it’s because spit roasting does take some preparation and hours of long, slow cooking to for the food to be correctly prepared.

“It involves a lot of replenishing coals, staring into fires and the occasional beverage,” he says. “Whole suckling pigs are not always available on demand and usually take a few days to source. Once demand increases there are plans to spit roast whole animals on a more regular basis but for now they will be for larger groups.”

On the feasting menu, groups of four or more can choose up to three dishes for each course with spit-roast pig or lamb subject to availability and cost that vary with the time of year.

But if your preference is a barbecued lamb shoulder or braised beef cheek – two of eight mains choices – it’s simply a matter of ordering from the feasting menu at the table.

The food theme is supported at Molten by the restaurant’s snug rear courtyard lending itself perfectly to the image of medieval banquets – complete with generous charcoal-fired bed for the lamb or pig spit.

On the á la carte menu, no main costs more than $28 and on Tuesdays, two- and three-course set menus are discounted. On Monday nights, $7 pizzas are available in the wine bar with the purchase of a beverage – they’re incredibly popular so it’s best to arrive early.

Molten hours
Lunch from 11.30am Wednesday to Friday
Dinner from 6.00pm Monday to Saturday
Wine bar from 4.30pm Monday to Thursday and from 4.00pm Friday and Saturday.

About Molten
Molten restaurant in the inner Auckland suburb of Mt Eden is owned by experienced restaurateurs Sven Nielsen and Ben Blair. The restaurant first opened its doors in August 2003 and Nielsen and Blair purchased it in 2011. In 2015, they subtly but effectively repositioned Molten as a neighbourhood bistro with a more relaxed and casual environment and more accessible prices. The main dining room, a wine bar, courtyard, and two private dining rooms are all housed within two adjoining heritage buildings in Mt Eden Village and dating from the 1850s. Molten’s menu celebrates produce sourced directly from supplier growers, farmers and fishermen with larger cuts of meat gracing the menu reflecting a growing global trend for ‘feasting’. The Molten wine bar menu encompasses light snacks, a range of small dishes, charcuterie and cheese – all of which are ideal for sharing - and more substantial main dishes. The menus are dynamic, reflecting the changing seasons and the inspirations of both the owners and the kitchen. Molten’s wine list is segmented by stylistic categories rather than variety and value for money is a prime consideration. There are several private areas within Molten available for functions.