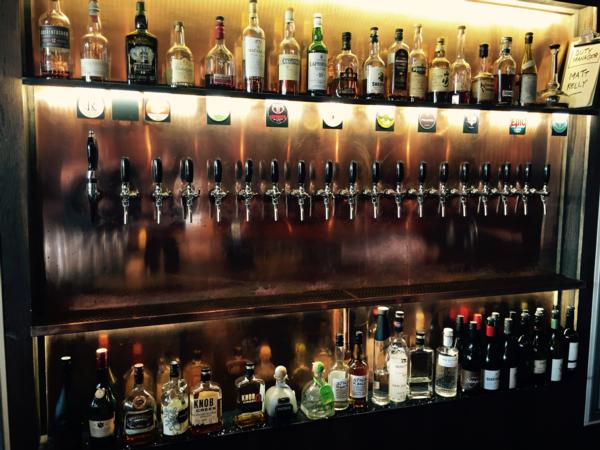 Beer taps are a bit like t-shirts; you really can’t have enough of them.

That’s the call from Auckland craft beer bar 16 TUN which is almost doubling its craft beer tap numbers to 19.

The decision is a result of both consumer demand and an increase in the production of quality craft beers by New Zealand breweries.

Hartigan says 16 TUN stocks only the best craft beer in New Zealand and that the bar’s increased offering makes it even more appealing as a craft beer destination.

“We have always had a great selection, but now we can provide a bigger range of beer styles and offer some of the more unusual beers coming on to market,” Hartigan says.

“With greater choice, you can spend an afternoon at 16 TUN drinking your favourite style without ever having the same beer twice.”

“Without the extra taps, our customers would miss out on some world class Kiwi beers.”

16 TUN’s on-tap line-up is constantly changing Hartigan says, so what’s on at any one time never stays the same.

“None of the taps is 100 per cent permanent with any beer. Part of being a freehouse means we aren’t tied to any brewery, so we are free to change what beer is on tap whenever we or our customers want.

“We exercise this right to the fullest extent, changing the beer every time the keg runs out. People stay interested and they know when they come back there’s always something new,” Hartigan says.

The 16 TUN full service menu also lends itself to those interested in taking time to enjoy the 16 TUN beer offerings in the vibrant Wynyard Quarter. From Ruakaka paua fritters and alpine origin Merino lamb to kumara fries, there is a range of ‘half tun’ and ‘full tun’ options available on the New Zealand-inspired menu to match the craft beer range.

Beer tastings are also available at 16 TUN for those interested in smaller sampling quantities of a range of beers. They are available in three different variations - ‘half crate’ (4 different 200ml beers), ‘6 Pack’ (6 beers) and ‘Full Crate’ (8 beers).

About 16 Tun
16 TUN is a Free House in Wynyard Quarter’s North Wharf that specialises in craft beer. 16 TUN has 19 craft beers available on tap, with a bottle range that exceeds 70 different beers, across a myriad of styles.  The 16 TUN kitchen provides a wide variety of crafted Kiwi food in ‘half tun’ and ‘full tun’ portions that are perfectly matched to the craft beer being served.