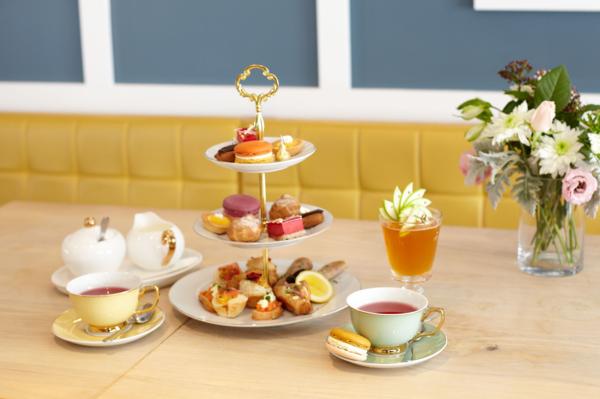 Lovers of macarons and cocktails are in for a sweet treat with La Fourchette’s exclusive new range of macarons aptly named Saveurs de France (flavours of France).

The six new macarons are based on popular French drinks and, perfectly timed for Mother’s Day and to support the launch, the restaurant is introducing a Saveurs de France traditional high tea.

Co-owner Romain Le Gal says each of the sweet meringue-based confections represents a taste of a region of France.

“So for the high tea we are pairing the alcohol and the macarons flavours with those typical of each region. We have crafted six cocktails especially to complement the macarons and they are being served at high tea with a select menu.”

Romain says it is generally thought the British began the tradition for high tea.

“But in fact, I am reliably informed tea first arrived in Paris in in the early 17th century some 20-odd years before it appeared in England,” Romain says. “It quickly became popular among the aristocracy and is indisputably French of course when paired with macarons.”

The Saveurs de France macarons have been made by Jaime Les Macarons exclusively for La Fourchette and sister restaurant L’Assiette. They are available for a limited time in each of the restaurants from 1 May in a box of six for $22.50.

At the high tea customers are served La Fourchette’s traditional menu accompanied by a macaron and cocktail pairing of their choice.

La Fourchette’s high tea runs from 1 May to the end of July for $60per person at La Fourchette only.  It is served daily between 3 and 5pm and reservations need to be made 48 hours in advance. Vouchers can be purchased in store at La Fourchette.

Any Tea or Coffee

La Fourchette in St Heliers represents the full French gastronomic experience throughout the day. From 7am the shop provides freshly baked pastries & breads, patisserie products and takeaway coffees. The café / restaurant provides a full á la carte menu created by Chef de Cuisine Adam Van Schravendyk. The modern menu is inspired by classic French recipes all made with quality produce. La Fourchette is delighted to cater for groups and functions in its private dining area. In June La Fourchette presents Fresh Friday, partnering with Monsieur Oyster and Mahurangi Harbour farmer Gwendal Roussin-Guillemot who is hand delivering and shucking freshly-harvested oysters for your dining pleasure. Every Friday in June between 3pm and 7pm. A Bientot.