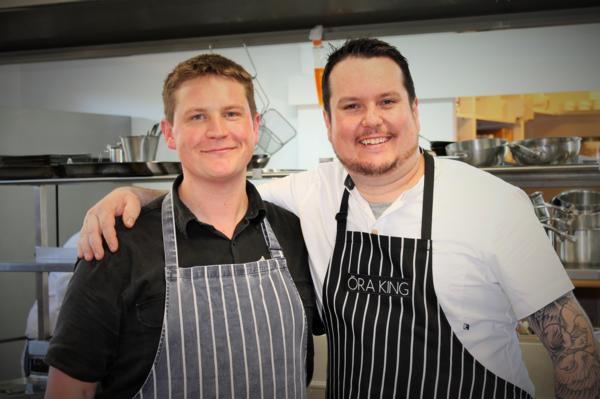 Ōra King has helped raise more than $24,000 at a special charity lunch on May 3 in aid of Kaipupu Point Sounds Wildlife Sanctuary.

More than 50 guests dined on a four course lunch created by Ōra King ambassador Matt Lambert, who is executive chef and co-owner of Michelin-starred New York restaurant The Musket Room and Bradley Hornby, head chef of Gibbs on Godfrey.

The Ōra King event was hosted at Gibbs on Godfrey restaurant in Marlborough with support from local producers and wineries including Mud House, Dog Point, Seresin, Greywacke and Fromm Wines.

Guests were treated to a spectacular raw bar of delicious seafood from the Marlborough Sounds followed by a four course lunch which included fresh produce from the region including Ōra King salmon and venison.

The $24,000 was raised through ticket sales as well as a silent auction and live auction which included the sale of an original Don Binney artwork. The artwork titled Kaipupu Point I was created by the late artist a few months before he died in September 2012 to raise funds for the sanctuary and was sold for $8,100 to an art enthusiast from Mangonui.

Ōra King general manager of marketing Jemma McCowan says the team was overwhelmed by the goodwill of those who contributed to the event.

“The event was about giving back to the region and we’re pleased we were able to sponsor such a great cause. New Zealand King Salmon has been a Rimu Sponsor of Kaipupu Point over the past four years and we have been proud to see the development of this predator-free sanctuary over that period.”

“We were absolutely blown away by the generosity of the guests at the fundraising lunch on Sunday.  Along with all the local producers and staff on the day who volunteered their time, energy and products to the lunch, the event was a huge success. The Kiwi spirit of philanthropy is alive and well in Marlborough”.

Kaipupu Point Sounds Wildlife Sanctuary is a community project to create a safe haven for wildlife on a peninsula of land near Picton at the top of the South Island.

The funds raised by Ōra King will enable longer opening hours for the Visitor Centre in Picton and enhance the experience for school children and tourists alike.

Ōra King salmon is a best-of-breed king salmon developed specifically for the food service industry. Ōra King is a result of a commitment to quality founded on a classic breeding programme born in the top of New Zealand’s South Island two decades ago. All of the company’s husbandry and breeding, everything which Ōra King represents, is dedicated to the professional chef. It is the best of the best. Ōra King is to salmon as Wagyu is to beef.