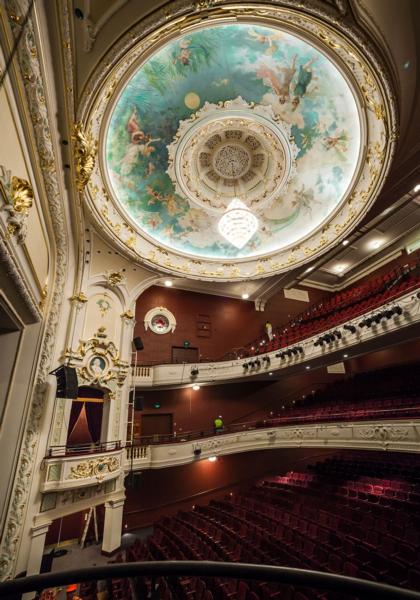 The historic theatrical venue, which reopened in November last year after 2011/2012 earthquakes forced closure, won Best In Category Gold in the Hawkins Heritage & Adaptive Reuses Award category, as well as taking out a Merit Award in the Coffey Education and Arts Property category of the annual awards.

Isaac Theatre Royal Chief Executive Neil Cox collected the Gold award thanking the design and rebuild team for what had been a unique and extremely challenging rebuild task.

“This incredible project has returned the Grand Old Lady of Christchurch theatre to her original Edwardian interior splendour, as well as significantly upgrading the theatre's public spaces and technically enhancing and future-proofing the venue for many generations to come,” he said today. "It was a significant effort from start to finish with a very talented and dedicated team of design consultants, all of whom became as passionate and excited about the rebuild and restoration as ourselves.

Mr Cox says the fact that the project was designed and built simultaneously right through until the final months, made the attention to detail vital and the team was able to continually assess and review each challenge that came along.

“The end result is absolutely stunning and accolades from public and professionals alike has been overwhelming. To have achieved this unique restoration rebuild both on time and under budget, and to have a major theatrical venue back in the city centre has enlivened the CBD and delivered a major anchor project for arts and heritage in the ever-evolving Christchurch recovery process. We are all extremely proud of what we have collectively achieved," he says.

The Isaac Theatre Royal reopened her doors on 17 November 2014 and has welcomed more than 70,000 patrons through the doors for productions ranging from Phantom of the Opera, Royal New Zealand Ballet, Comedy, Music concerts, the Christchurch Symphony Orchestra, Children's theatre shows, and will also host the New Zealand International Film Festival in August having been upgraded for digital cinema and surround sound.

The awards are an annual celebration of excellence in property development judged on economic and financial factors, project vision and innovation (including degree of difficulty), design and construction, owner and user satisfaction, and sustainability and efficiency of operation.

“This theatre has become world famous through its rebuild and to be honoured by the Property Council for this massive collective team effort is the absolute cherry on the top. We started out on the project with a vision and belief, without having the budget, but some extensive fundraising coupled with insurance got us to the $40m target. There are many funding organisations to thank, including Lotteries Grants Board, Christchurch Earthquake Appeal Trust, Christchurch City Council, Canterbury Community Trust, Lion Foundation, and many more.”

Neil Cox also acknowledged the dedicated personal help from the stars of stage and screen Sir Ian McKellen, Richard O'Brien, Flight of the Conchords and so many others who gave the project team the global boost and belief to keep going. He added that they were fortunate to have been so well supported and represented so frequently through local, national and international media on what has been a massive but very rewarding journey.

"However, the real heroes are our design and rebuild consultants, RCP, Warren & Mahoney, Holmes Consulting Group, Holmes Fire, Powell Fenwick and our building contractors, Naylor Love. Having such a dedicated and committed team brought this theatre back to life. Such talented people, and a delight to work with throughout. We all smile every time we sit in our seats for a show at the Isaac Theatre Royal; a huge thanks to all involved."

Mr Cox also extended sincere thanks to the board of the Theatre Royal Charitable Foundation for the belief and inspiration to undertake one of the most challenging rebuild projects in the city, both from design to financing the rebuild of the Isaac Theatre Royal was a significant task and one of great hope and inspiration in the recovery of Christchurch