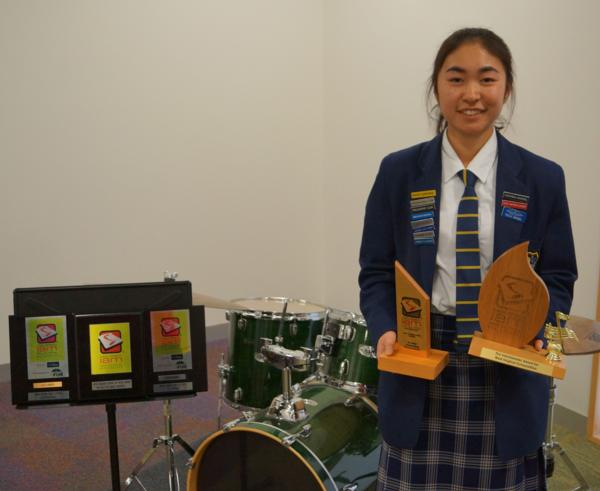 Rangi Ruru Year 12 Music Scholar Karen Hu has been wowing audiences in Blenheim, Christchurch and Wellington over the past two weeks.

Karen has just returned with the Rangi Ruru Jazz Band and Combo from the Southern Jam Youth Jazz Band Festival in Blenheim with three awards.

A multi-talented musician, Karen received the ‘The New Zealand School of Music Award for Best Big Band Drummer’, ‘The Interislander Award for Best Original Composition’ titled Kazza’s Jam and ‘The Jan and Malcolm Award for Most Outstanding Musician’.

As a drummer she helped the Rangi Ruru Jazz Band to win a Gold award, and the combo a Silver award.  This success comes after both groups won Silver at the CPIT JazzQuest competition the week before, as well as Karen winning the Best Drummer award.

The weekend before Southern Jam, Karen was in Wellington at the Chamber Music Nationals, where she was the cellist in her piano trio Jeunesse Élégante, playing music by Debussy.  This group was one of six national finalists, winning a Joan Kerr Gold award.

Rangi Ruru's Director of Music Janet Kingsbury says that to have a student achieving at such a high level on two very different instruments in two diverse genres is a stunning achievement.

“Karen does not take her exceptional talent for granted.  She works very hard and plays a pivotal part in the success of all the music groups she plays in.  An inspiration to her fellow students, she is always willing to support others with their music making to help them to become the best that they can be,” says Mrs Kingsbury.