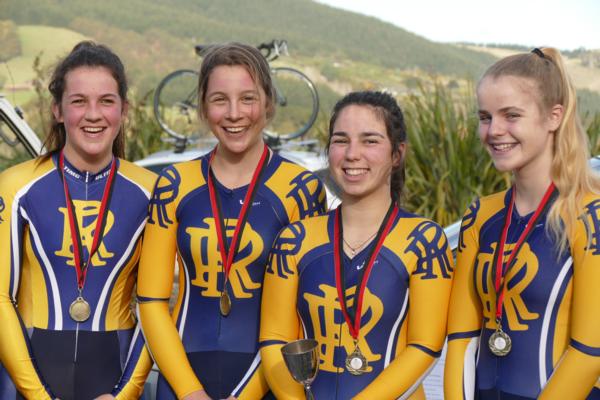 Rangi Ruru Girls’ School has re-established their position at the head of Canterbury Secondary School girls cycling, winning the Litolff Cup on the course in Tai Tapu on 19 August.

The new team made up of Sarah McLeod (Year 12), Libby Vincent (Year 13), Ava Morrow (Year 10) and Millie Mannering (Year 13) have been through a year of rebuilding after losing the title to Christchurch Girl’s High School in 2014.

Head Coach, Marc Prutton says the girl’s dominance in this race is a credit to their determination and the hours put into training and preparation.

“Considering the inexperience of several members of the team coming into this season, I am thrilled at the progress the girls have made in this relatively short time. This result is a wonderful bonus”, said Mr Prutton.

The team now looks to preparing for the National Secondary School’s Road Cycling championships which will be held in the Manawatu from 26-28 September.