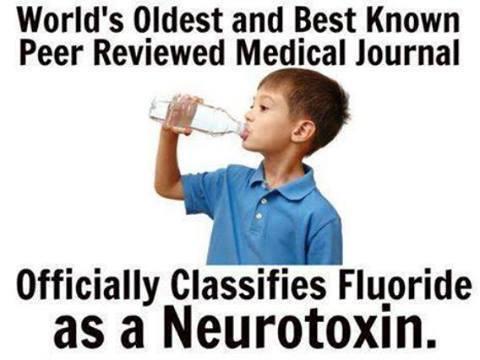 Currently in nelson the DHB is spinning the web of fear around the rotting teeth of the regions kids.  The DHB's CEO, Chris Fleming is heading the push with the usual rhetoric of fear  as well as the usual toxic remedy mass medication of the entire regions water supply with Fluoride.

“….NMDHB chief medical officer Nick Baker said it was important the community were outraged about the right things as fluoride was a solution to a serious problem. …..and ," said Dr Baker  ……"The thing to be outraged about is that 50 per cent of our kids have got a body part rotting by their fifth birthday," said Dr Baker. "And we've got an older population of people keeping their teeth to maturity who actually are vulnerable to tooth decay so all the community will benefit….."

While these warnings are emotive, I Commend the DHB for caring about the teeth of the regions kids, however, fluoridating the water  i.e. – mass medicating the entire regions drinking water is really not the answer – not these days – it’s the 21st century not the 10th

Where is our choice in all of this Mr Baker ?

Today we live in a vastly different world –  we are privy to much more information  - we can access scientific reports the moment they hit the web, we can hear health professionals - doctors and dentists speak out against mass fluoridation – we can see  the trend in pushing the fluoride agenda and we can see and learn from what other people are doing – we can join together to share information and strategies to prevent this occurring in our area, in short - we are informed

The biggest thing that struck me when I heard about this was the science being touted safe by government and he DHB is not only dodgy and out of date but out of step with global trends.

A new consensus is emerging

We know the cause of rotting teeth – its sugar  - we are as a race soaking in it with hidden sugars in all our foods and drinks – is the DHB urging the government to regulate industries use of sugar in products targeted to kids with the same emotive spin its priming residents of nelson to accept mass medication ?

once upon a time Fluoride was hailed as the end of tooth decay – they said it was safe and sound …just like DDT  and 245T and asbestos and so many others – only to find out years later they were wrong that these substances were deadly toxic to humans ….Fluoride is NO exception …

For many of us the idea that fluoride is safe is an old one – it has  been an accepted  set of beliefs handed down to us for  generations – most never questioning either the government or the professionals promoting it – believing that other people had their best interests at  heart – in other words they trusted the words of the ‘experts’ and the government not to do harm.

However just last year the  Lancet journal no less included Fluoride as a known  neurotoxin and added it into its long list of industrial  chemicals it holds responsible for neuro-devoplmental disabilities including autism, ADD, dyslexia and other cognitive impairments which affect millions of children worldwide.

here is what they said In the summary

….”…..some diagnoses seem to be increasing in frequency. Industrial chemicals that injure the developing brain are among the known causes for this rise in prevalence. ………Since 2006, epidemiological studies have documented six additional developmental neurotoxicants—manganese, FLUORIDE  chlorpyrifos, dichlorodiphenyltrichloroethane, tetrachloroethylene, and the polybrominated diphenyl ethers. ………..To control the pandemic of developmental neurotoxicity, we propose a global prevention strategy..."

you can read the full text here

How do you balance the danger of fluoride causing neuro developmental disabilities in children while protecting their rotting teeth ?

The DHB continues in the Nelson mail August 26th …..”….that community water fluoridation is a safe, effective and affordable population-based strategy for the prevention of dental decay and supports the Ministry of Health's position, recommending the fluoridation of drinking water supplies to the optimal level of 0.7 – 1.0 mg/L to provide further protection against dental decay…..”

....”……The case against science is straightforward: much of the scientific literature, perhaps half, may simply be untrue. Afflicted by studies with small sample sizes, tiny effects, invalid exploratory analyses, and flagrant conflicts of interest, together with an obsession for pursuing fashionable trends of dubious importance, science has taken a turn towards darkness.….”

…”…..Harved medical schools Dr Marcia Angell …..”….. It is simply no longer possible to believe much of the clinical research that is published, or to rely on the judgment of trusted physicians or authoritative medical guidelines. I take no pleasure in this conclusion, which I reached slowly and reluctantly over my two decades as an editor of The New England Journal of Medicine.”

The fluoride they want to put in our drinking water is not a pharmaceutical grade additive,  nor is it a nutrient rather it is an industrial waste by-product and the history of how it came to be embraced by doctors and dentist alike is a fascinating one and as usual its also an American one.


…..”….American ‘education and research’ was funded by the Aluminum Manufacturing, Fertilizer and Weapons Industry looking for an outlet for the increasingly mounting fluoride industrial waste while attaining positive profit increase. ……Through sly public re-education, fluoride, once a waste product, became the active ingredient in fluorinated pesticides, fungicides, rodenticides, anesthetics, tranquilizers, fluorinated pharmaceuticals, and a number of industrial and domestic products, fluorinated dental gels, rinses and toothpastes. Fluoride is so much a part of a multibillion-dollar industrial and pharmaceutical income, that any withdrawal of support from pro-fluoridationists is financially impossible, legally unthinkable and potentially devastating for their career and reputation….”

…..”….. Convincing the general public that we need to add fluoride to our water supply was one of the most sophisticated cons of all time. It created a multi-billion dollar industry and enabled manufacturers to sell this worthless toxic by-product of aluminum to local municipalities for a profit…..”

…”….Fluoride is still defended today for two reasons:  The massive profit produced by selling it to local municipalities, and the massive liability and lawsuits that would follow an admission that it is in fact toxic and harmful…..”
you can read it in full here

….”….. "I am appalled at the prospect of using water as a vehicle for drugs.
Fluoride is a corrosive poison that will produce serious effects on a
long range basis. Any attempt to use water this way is deplorable."
- Dr. Charles Gordon Heyd, Past President of the American Medical Association.

many people may think that there are medical ethics that stop the mass medication of the public water supply and that would be true …and here is why.....but ....in NZ dirty politics  has come out to play

Fluoridation – or any practice that uses the public water supply as a vehicle to deliver medicine – violates medical ethics in several important ways:

It deprives the individual of his or her right to informed consent to medication.
It is approved and delivered by people without medical qualifications.
It is delivered to everyone regardless of age, health or nutritional status, without individual oversight by a doctor and without control of dose.
The safety and effectiveness of fluoridated water has never been demonstrated by randomized controlled trials–the gold standard study that is now generally required before a drug can enter the market.

……”….. On the 27th January 2015 Minister of Health, Dr Coleman, signed into law a Regulation which exempts all chemicals containing fluoride from being considered medicines if they are delivered via the public water supply. The absurdity of this should be plain for anyone to see. Sodium fluoride is already, and continues to be, a classified medicine. However, if a council adds it to the public drinking water supply it is not a medicine.

Dr. Phyllis Mullenix who had been studying the toxicity of Fluoride since 1987, was asked to study fluoride for the military in 1999  - she discovered

…”….. In our 1995 paper (2), we reported that brain function was vulnerable to fluoride, that the effects on behaviour depended on the age at exposure and that fluoride accumulated in brain tissues. And this ……”….. Criticisms of our study by dentists say that our results in rats are not relevant to humans because the doses we used were too high (75-125 pprn NaF in drinking water). These criticisms are without merit because our doses in rats produce a level of fluoride in the plasma equivalent to that found in humans drinking 5- 10 ppm fluoride in water, or humans receiving some treatments for osteoporosis. This plasma level is exceeded ten times over one hour after children receive topical applications of some dental fluoride gels. Thus, humans are being exposed to levels of fluoride that we know alters behaviour in rats. Perhaps dentists see no problem with this fact, but scientists involved with toxicity risk assessment will view it differently. The fluoride levels in the drinking water of our rats were not high, they were taken from the well known animal model developed for the study of dental fluorosis, a model used repeatedly by dental researchers for several years. Read more here

so lets get active

Flouride Free Nelson invites you to a public info meeting on Saturday 5th of September in the  1903 square  where there will be nice music, lots of information a coffee cart and talks – please come and make  yourself known – let us hear  your feelings on this …..sign a petition to council – support this movement and keep our public drinking water fluoride FREE