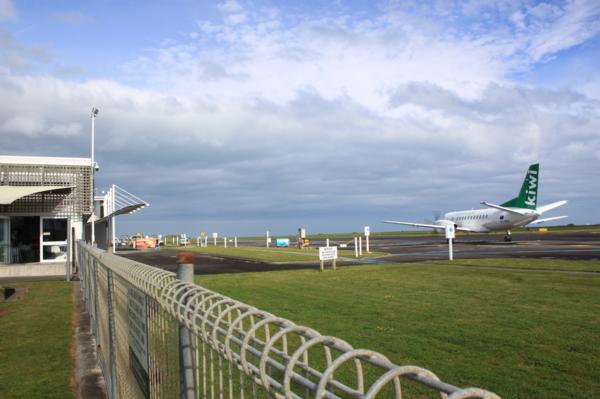 The Taranaki region has a lot to celebrate coming to the end of 2015 as three new airlines take to the nineth busiest airport in New Zealand - New Plymouth Airport.

Air New Zealand currently hold a monopoly over the domestic airport, which in 2014 saw more than 340,000 passengers however that's set to change with Jetstar on the way, and the speculation a third airline could be on the way in the future.

New regional airline Kiwi Regional Air had a tour of their 34 seater Saab 340 aircraft which touched down in New Plymouth at 9.45am this morning.

A Facebook page in support of the airline coming to New Plymouth has 763 likes.

Before they can operate airlines are required to conduct proving flights in order to gain certification from the CAA and New Plymouth was a lucky destination for the flight.

Ewan Wilson, CEO of Kiwi Air was one of the passengers aboard the flight tour along with other Kiwi Regional Airlines staff.

"With Jetstar beginning services to compete with Air New Zealand, and Kiwi Regional Air in the distance for the future, our airport is at an really exciting stage," he said.

"It's important our region back's these three airlines, especially the newcomers Kiwi Air and Jetstar who require our patronage more than anything."

When asked about future flights with Kiwi Air and Jetstar, Riley said it was important that the services were sustainable and that it would be a slow process, however, it's likely more routes will be added.

"Jetstar might look into Wellington services between New Plymouth which would be really positive for competition, and Kiwi Air could open up Nelson or Hamilton services."

In a survey conducted by Riley, with more than 500 Taranaki residents, Nelson was on the top of the list.

"My survey results show that 96% of the district want region to region services started, and 31% would use the services on a regular basis for business. That's big numbers," he said.

Kiwi Regional Airlines does not have New Plymouth services however they will fly return flights between Hamilton and Nelson, Nelson and Dunedin, and Dunedin and Queenstown from October 27 2015.

Air New Zealand most likely will not start any other routes other then ones currently operated. Hawkes Bay Airport plans reveal New Plymouth could be a future destination.