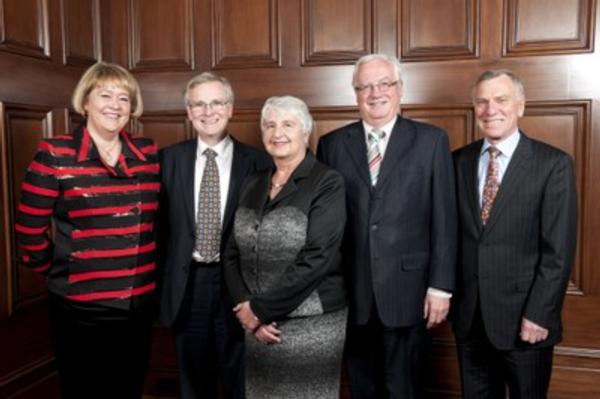 Last week the Supreme Court of New Zealand dismissed an application for leave to appeal which remarkably avoided  recording or discussing what the only grounds for appeal actually were.
The one ground relied upon was Judicial incapacitation, raised after Court of Appeal Justice Rhys Harrison allegedly issued a judgment which seemingly bore no resemblance to the application before him.

The  application sought to amend a sealed judgment  dated 14 October 2003, recently determined to be materially different from the original orders and decision of the Court dated 8 October 2003.The "judgment"  was drafted by Roger Chapman from Johnston Lawrence Solicitors and changed the legal capacity of the parties by altering the original decision to record Mr Chapman's view that the debt was owed to his client personally.

The Court had a different view, and on two separate occasions ordered the costs payable to executors of the estate despite the solicitors arguing that it was a personal debt. Consequently, the application before Justice Harrison was addressed to the sealed judgment,  its purpose was clearly apparent from the way in which it was styled (“Interlocutory Application on Notice to Amend 14 October 2003 Judgment for Costs”)

In the judgment under appeal, Justice Harrison addressed this aspect of the case by saying: "I record what is obvious: the Registrar has no power to amend or otherwise interfere with the formal decision of this Court made on 8 October 2003."  What is obvious from his decision; is that Justice Harrison either did not read the specific application before him nor did he comprehend what it was he was being asked to do.

In dismissing the application without considering the ground of Judicial incapacitation , the Supreme Court said, "All of this has now been largely over-taken by events as the Court of Appeal has heard a further application by the applicant seeking correction of the sealed order, an application which has now been dismissed. There is no point of general or public importance involved. As well the miscarriage of justice ground is not satisfied. This is because the challenge to the sealed judgment has now been fully argued and determined by the Court of Appeal".

However, the Supreme Courts reliance on a judgment it says has been fully argued and determined is undermined by a simply reading the judgment itself which expressly concluded more than once that the bench had no answer to a material discrepancy (which they accepted to exist) between the judgment issued by the Court of Appeal and the “same” judgment sealed by Mr Chapman.

The Court of Appeal noted ; " It is not clear to us how the intituling in CA193/03 was changed from J M Creser as respondent at the outset to the form in which it is shown in the reasons for judgment of 8 October 2003. There is nothing we can find on the Court file to explain the change nor any evidence of an order amending the intituling being made. Some form of error appears to have occurred given the discrepancy between the reasons for judgment and the sealed order but we are unable to determine some 12 years after the event how this came about or which version is correct."

What is clear, the Court of Appeal have now conceded they are unsure which is correct, their own judgment or a document allegedly fraudulently altered by a solicitor. Instead of providing a definitive answer to the question of judicial incapacity and the certainty of Court decisions, the Supreme Court ruling flys in the face of the Public Records Act 2005, (requiring the grounds on which an appeal is sought to be recorded), and decided that its is not a miscarriage of justice nor matter of public interest, to uphold a decision of the Court of Appeal over an "erroneous" document changing the effect of a publically recorded decision.