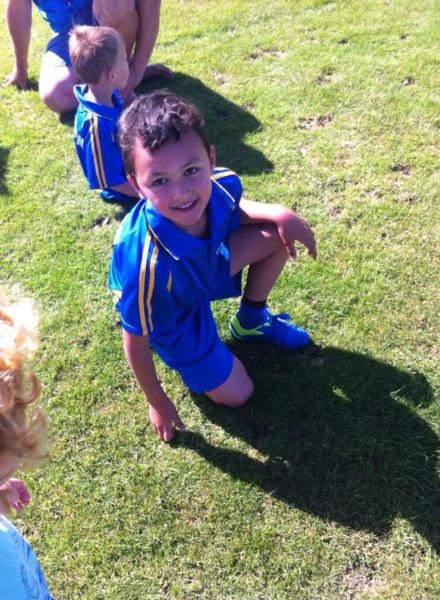 Jake Diack isn’t enjoying the sore legs he gets from running very much, but the seven-year-old is determined to train as hard as he can for his first ever triathlon event this weekend.

The Donovan Primary School pupil from Invercargill has signed up for the Weet-Bix Kids TRYathlon being held in Mosgiel, and is looking forward to the biking section the most, but has been sticking to a training schedule to prepare for all three parts of the race.

“I really hope I come first, but I know it’s not about winning, it’s about having fun,” says Jake. “I was excited when I saw [the TRYathlon] on the Weet-Bix box and said, ‘Mum, it says to give it a try’.”

For Jake’s mum Frankie, his enthusiasm was extra special as she had always wanted to participate in the TRYathlon events as a child but didn’t have the means to at the time.

“It’s going to feel that much cooler to see him do it seeing as I didn’t get to as a kid,” says Frankie.

Frankie says Jake’s dedication to getting ready for the race has been impressive. “As soon as he was registered, we sat down and made a training schedule, and he’s been ticking off each day as we go,” she explains.

“If we miss a day or two, he identifies what he needs to do to catch up, and it really shows how determined he is. I’m really proud of him, it’s nice as a parent to watch him trying so hard.”

The proud mum and Jake’s younger brother Matthew (5) will be on the sidelines to cheer him on at the TRYathlon.

“Seeing him do the race, and seeing him realise that all that hard work is going to pay off will be the highlight for me” says Frankie. “It is important for Jake to work hard towards his goals and training for the Tryathlon has been a great learning experience.”

According to a survey of 2500 parents and children throughout New Zealand about the Weet-Bix Kids TRYathlon*, 90% of parents surveyed would be very likely to recommend the events to others, with 84% believing it had a positive impact on their child’s self-esteem.

A further seven out of 10 (72%) parents said their child was glowing with pride when they finished the event, and the vast majority (84%) of children really enjoyed participating in it.

The Sanitarium Weet-Bix Kids TRYathlon is taking place in Mosgiel, at Memorial Park on Sunday 28 February, with events running around New Zealand until 10 April 2016.

The events are open to children aged between 7 and 15 years old, and consist of a swim, followed by a cycle and a run.

Registration is easy - simply visit try.weetbix.co.nz to sign up for the event closest to you. Online Registrations for the Dunedin event have now closed but entries will be taken on the day between 7.00am and 8.00am.