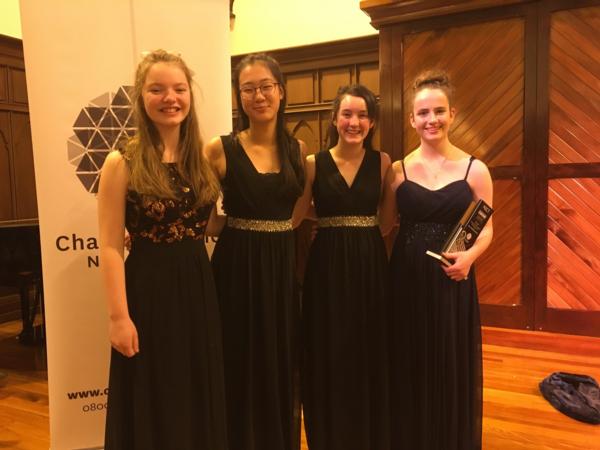 Exceptional Success is Music to Their Ears

It has been a hugely successful couple of weeks for Rangi Ruru music students.

The school’s senior choir Resolutions has topped a stunning week of musical achievement by winning selection for the New Zealand Choral Federation Big Sing Finale; one of 24 schools that will attend this event in Dunedin in late August, and one of only four choirs from Christchurch.

This follows two significant wins for Resolutions at the Big Sing regional competition in Christchurch, where they won Best Performance of a Contemporary Work and the award for the Most Outstanding Recital from a Girls’ Choir.  Rangi Ruru’s Junior Chorale was named joint winner of the Most Outstanding Junior Choir award at the same regional competition.

Demonstrating incredible depth in music, Rangi Ruru also has two of only 12 groups selected for the national semi-finals and finals of the NZCT Chamber Music Contest, to be held in Auckland early next month. Graznya’s Girlz and From Russia with Love secured their places after their selection for the South Island Regional finals.

Graznya’s Girlz (Grace McKenzie, Sarah Lawrence, Victoria Park and Rachel McSweeney - violins) won the District Contest, along with the University of Canterbury Trophy for the Best Performance, and then went on to win the South Island Regional Finals. From Russia with Love (Grace McKenzie – violin, Karen Hu – cello, Isabella Gregory – piano) were Highly Commended in the District Contest and also a South Island Regional finalist.

Rangi Ruru Director of Music, Janet Kingsbury, says it is simply outstanding for a small school to have such a high representation at national finals.

“Places in the national finals of both the Chamber Music Contest and Big Sing are hard to win and to have groups at both is a remarkable achievement. It demonstrates not only a depth of musical talent, but also the huge amount of dedication and commitment these girls give to their music,” says Mrs Kingsbury.

As well as these national selections, six girls in Year 7 and 8 have been selected to perform in the Christchurch Schools’ Music Festival special groups - four in the Orchestra, one in the Concert Band, and one in the Senior Choir.

All Year 7 and 8 girls will sing in the massed choir on the final night of the Festival, which runs from 26-28 October at the Horncastle Arena.

Performances from Graznya’s Girlz and From Russia with Love in the South Island Regional finals (hyperlinked below):