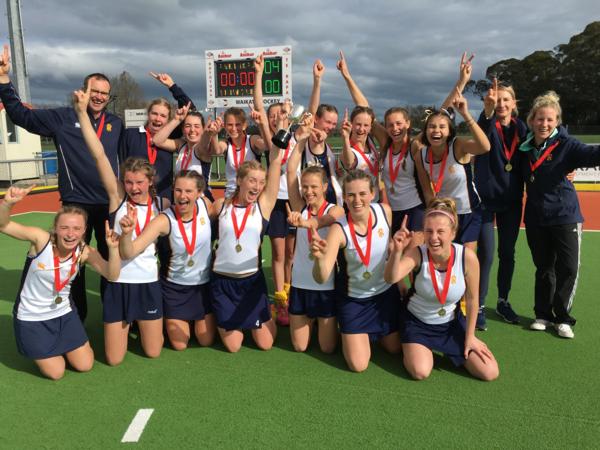 Assistant coach Amy McKerchar says the team’s sense of self belief was key to their success.

“The girls were determined they could improve on their placing from last year and improve they certainly did”, said Ms McKerchar.

“The team had mixed results in our round robin competition here in Christchurch but the girls were coming together nicely pre-tournament and were rewarded for their positive attitude and ability to work as a team. They are a true team of champions and an absolute pleasure to work with,” added Ms McKerchar.

The first pool game against Westlake Girls High School showed the girls were well prepared, securing a 6-1 win. The second game against Queen Margaret’s College did much to steel the resolve of the group as they roared home with a massive 19-0 win.

The team’s only loss of the tournament was against another local team, Christchurch Girls’ High School, going down 2-0.

Having secured top spot in their pool, the quarter final match up against St Cuthbert’s College was a tightly contested game and resulted in 1-0 win to progress Rangi Ruru to the semi-final against defending champions, Whangarei Girls’ High School. Played in a similar fashion, the girls held onto their 1-0 lead to book themselves a spot in the final.

Rangi Ruru’s Most Valuable Player for the tournament was goalkeeper Alys Mathew (Year 12) who had a remarkable tournament with only three goals conceded against her.