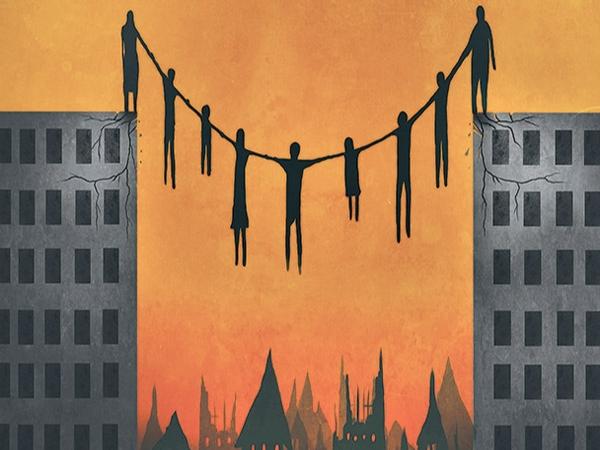 Noam Chomsky writing in War is Peace, Freedom is Slavery, Ignorance is strength, explains the terms of political discourse; Language,  and how what we think something means is not what it means politically, and because we don’t know the political meaning we are becoming out of step with what is going on.

“….Take democracy, Chomsky says, according to the common sense meaning, a society is democratic to the extent that people can participate in a meaningful way in managing their affairs.   But the doctrinal meaning of democracy is different – it refers to a system in which decisions are made by sectors of the business community and related elites.  The public are to be only ‘spectators’ of action – not participants.  They are permitted to ratify the decisions of their betters and to lend their support to one or another of them but not to interfere with matters – like public policy, this is none of their business”

Chomsky goes on to explain….”…If segments of the public depart from their apathy and begin to organise and enter the public arena – that is NOT democracy, rather it’s  seen as a crisis of democracy in the proper technical usage.  It is seen as a threat to overcome in one-way or another…”

In other words, when you go, Oi, what are you doing - you can’t do that we have rights –this in real terms is seen as a crisis of democracy and will not be tolerated, hence all the terrorist laws to stop anyone from  standing up against the system.  Including the latest that prohibits any protest on the sea  that might object to big oil coming to our wild and dangerous shores to drill for oil, or protest a US warship entering our harbour

In today’s world the corporation is bigger economically than most countries, governments have now become corporations and listed on the stock exchange, they serve corporations because a nation has become nothing more than a commodity to them, another source of both resources and revenue’s.  Today people only have value if they are productive workers.  It is the government that allows zero hours, it is the government that protects producers from having to tell you what is in the food.   Today it is no accident that New Zealand Prime Minister John key – ex bankster – now sits in the Prime Ministers seat and is actively pushing for the Trans Pacific Partnership.

Why, because the TPPA is a CORPORATE CONSTITUTION:   It’s terms and agreements set out the rights and regulations of all business dealings and has been decades in the making.   Whether it comes in under that title or another makes no difference, it will give rights to corporations that override any government policy and any human rights.  That MP’s and the Prime Minister are pushing this signifies how deeply entrenched they are in the corporate system.

As the corporate government begins to align more with its corporate sponsors, it begins by unplugging from social responsibilities and we begin to see cuts in our essential services.

Community groups throughout New Zealand have had funding cuts by Governments and mental health and community support groups are left to founder.
The price of housing has become unaffordable even to the middle class, and people everywhere are suffering.  Many can no longer afford doctors visits and others are forced to live in their cars, and families squeeze into garages.

Neo-liberal policies pushed into play, way back in the 80’s  by Labour’s Roger Douglas, who betrayed not only the people but his own party, he was rewarded with a knight hood from the economic warfare arm of the Mont Pelerin Society .  Thanks to him, Neo-liberal policy, has now, after almost 9 years of National rule created an I Daniel Blake welfare system that is actively placing people in poverty, where once it was created to lift them out.

For the very first time ever – kiwis are now becoming homeless in large numbers due to government policy where support systems are being cut or no longer exist – where state housing has been degraded and land sold off to the wealthy, where private corporations are being invited to step in and take over.  It was always taxes paid for by the people that paid for these social services, and it was governments who, in trust, managed them.  Now they are being sold off or run down and given to private enterprises to manage

And yet despite all of this Bloomberg reported just a few days ago that the Mega Rich have found a new Refuge,  guess where?

Because government has become a corporation, whose psychological profile in the movie The Corporation turned out to be psychopath.   John Key love him or loathe him is a brilliant CEO, however, he sucks as a prime minister. He is serving a bigger interest than the people of New Zealand, who he holds in contempt.

The farce that is the United States elections is showing all who care to look that voting will not change anything.  The system is corrupted to its core.

WikiLeaks, Julian Assange was interviewed by John Pilger, one of the world's most powerful investigative Journalists and documentary makers, and here we find the truth – video and transcript can be found here

In Oliver Stones latest movie, Snowdon, we see how the whole intelligence system works, and how one man within it, could no longer stand in his integrity while knowing what he knew and so he told the world the truth   but we knew this when in 2014, both Assange and Snowdon appeared in the Auckland town hall together in what was billed The Moment of truth, where Glen Greenwald and Kim dot Com revealed just how deep we the people of New Zealand have been lied to by everyone in the National government including the Prime Minister, who still continues to lie about it even while being exposed around the world.

A crisis of democracy is a very dark place to find ourselves, but we must remember that before any change on any level can happen, the need for change must first be seen.

The meaning of this word according to the Greeks’ is  An apocalypse (Ancient Greek: ἀποκάλυψις apokálypsis, from ἀπό and καλύπτω meaning "uncovering"), translated literally from Greek, is 'through the concealed', meaning a disclosure of knowledge, i.e., a lifting of the veil or revelation.

As we head towards 2017 – It really is time to wake up to the lies, deceit, and betrayal of our government.  To question and challenge everything, but more, it is time for those in the positions of power and influence who still have integrity, who want to see this country reclaim it's sovereignty from the corporation and to bring back a standard of  living that we were once proud of, it is time for you to stand up.

All our historic freedoms, not to mention nearly every aspect of our nation's essential sovereignty, security and prosperity, are under attack like never before by powerful outside corporate and financial interests working through rogue and treasonous elements within our political class.

The lawyers, the judges, the policy makers you are the ones who can stand up now and use the law, while we still have it because in Britain it is in danger of being done away with

….”…. On Saturday 19th November, in the ancient capital of Winchester, hundreds of constitutional experts and activists will be gathering at the Guildhall under the gaze of King Alfred the Great, also known to history as Alfred the Lawgiver.  An urgent coming together is now essential as our ancient, enduring and proven Common Law Trial by Jury Constitution, as confirmed and protected by the 1215 Great Charter of English Liberties, Magna Carta, is now under attack by criminals and traitors like never before...."...

We are living in a time where corporations are toxifying and taking over the world for their own means  and they have been given that power by our own political representatives who are no longer representing the people, but the corporation and so when we stand up and say no more, no way we are confronted by police, employed to protect the corporate rights over the rights of people, to have clean air, and clean water and living forests.  When people stand up to protect their land base from the corporate raiders, it is the people who are labeled terrorists, and so when people stand up and say NO – it really is seen as a  crisis of democracy by the corporate elites

There is no longer a democracy and this seriously need to be comprehended, it is an Oligarchy

a small group of people having control of a country, organization, or institution."the ruling oligarchy of military men around the president"

a country governed by an oligarchy."the English aristocratic oligarchy of the 19th century"