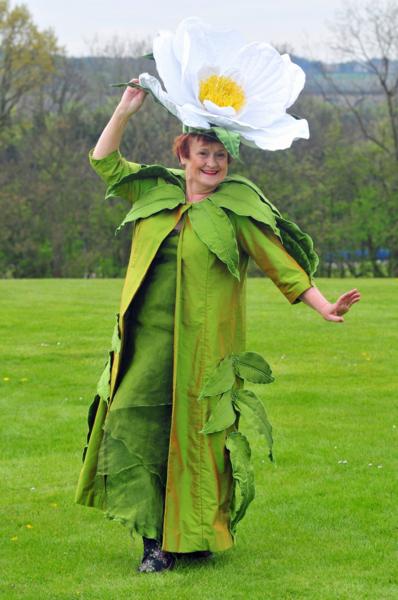 Each year the Palace holds three summer garden parties and Jenny left the specially designed hat to be worn at one of the coveted events before she returned from the Harrogate Spring Flower Show ten days ago.

“I made it especially for the Harrogate exhibition so when the wife of the Chairman of North of England Horticultural Society Council fell in love with it, saying it would look fabulous at the Buckingham Palace Summer garden party to which she had been invited, how could I not leave it for her to wear?” she says.

Invited to exhibit at the Harrogate Spring Flower Show which was held in late April, http://www.flowershow.org.uk/ Jenny presented her Christchurch Connection exhibition which included 15 stunning costumes, in the UK for her first exhibition outside Australasia.

“It was so wonderful to have people come up to me who had been to the Botanic Gardens Tea Kiosk in Christchurch and had seen the current exhibition,” she says. “One woman had a book and photos of my designs and was waving them around during one of my presentations. I talked to her afterwards and was blown away by her enthusiasm which was fantastic.”

Many visitors to the show went specifically to see Jenny’s exhibition, which was all about promoting Christchurch.

“I feel honoured being able to spread the word about our beautiful city and the rich culture visitors can expect to find when they visit us,” she says. “Although there’s been some recent negative publicity about our garden city image, I am confident it’s a blip and we will be back even stronger than before.”

Jenny and her team are open all weekend in the Botanic Gardens and invite mums, daughters and sons to come and have their photograph taken with the costumes and “perhaps pop a beautiful flower hat on”, says Jenny.

There are also vouchers to be won on Enchanted Garden Facebook page. https://web.facebook.com/Jenny-Gillies-Enchanted-Garden              http://www.JennyGillies.com

(entrance off the Armagh St carpark bridge to the Gardens)

Jenny, who lives in Christchurch, combines her love of gardens and flowers to create truly amazing costumes, often taking three months and up to 70 metres of sumptuous silk and velvet fabrics to complete.

A former microbiologist, Jenny started making wearable art 20 years ago after a sunflower hat she made was spotted at the annual Christchurch Cup and Show Week horse racing events, and she was then commissioned to make more. Jenny has gone on to produce costumes for theatre, film and opera, and has won several awards.

Her work has featured at the Royal Adelaide Show, the World of Wearable Art Awards, and Ellerslie International Flower Show. A selection of her designs is currently on display at the Christchurch Botanical Gardens to mark the reopening of the historic Tea Kiosk following the devastating earthquakes of 2011.

Jenny’s gowns begin with a real flower, which she pulls apart to create patterns for each element and ensure that her creation is botanically correct. She now has a collection of around 100 costumes and displays a regularly rotating selection at the Victorian Tea Kiosk in the Botanic Gardens in Christchurch.