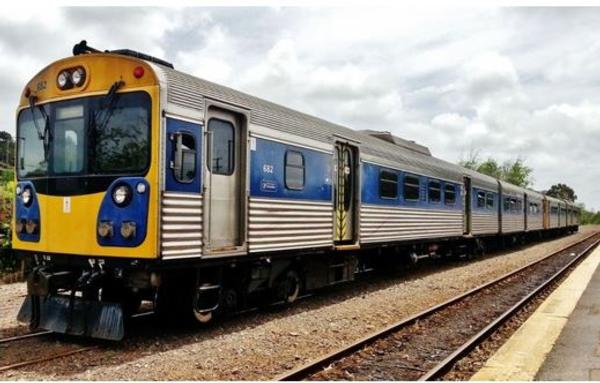 The kind of engine and carriages in the DASH proposal CREDIT: Tane Apanui 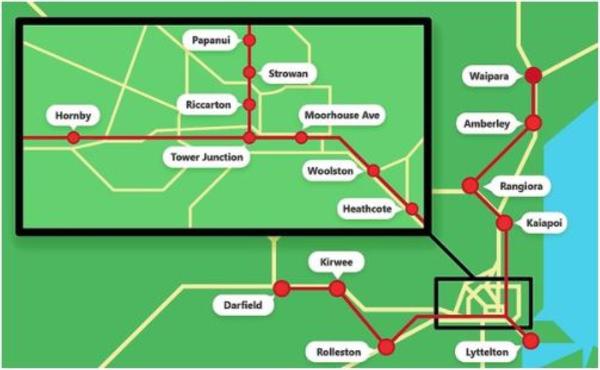 The man behind a passenger rail proposal for greater Christchurch is disappointed staff advising a local government transport committee have knocked back the plan.

A recommendation to the Greater Christchurch Public Transport Joint Committee (GCPTJC) does not support the proposal for a passenger rail service, to ease congestion on our roads.

Tane Apanui presented “Dash Rail” to the GCPTJC in March, followed by a meeting with the author of the 2014 AURECON report “Rapid Assessment of the Northern Corridor”, and three CCC and ECAN staff.

“I felt in the meeting that this was not a project the attendees were keen to look at further,” says Mr Apanui. “Now when I read the very brief and undetailed report to be considered by the committee today, it’s clear this was never going to fly with staff advising the GCJPTC. It’s a shame as some of the issues raised in the report are not insurmountable and some are just plain incorrect.” (These are listed below).

Tane Apanui says in the report being presented to the GCPTJC today, significant weight is given to three earlier reports, two of which are ten and nine years old, respectively.

“The Christchurch Rolleston and Environs Transportation Study” from 2007 looked at future transportation in the southwest and south of Christchurch to 2021. As the committee report says, “The study addressed the potential for commuter rail services in the study area based on probable patronage”. That’s ten years old and pre-earthquake. We must be more nimble and relevant if we are to effectively address problems such as traffic congestion and referring to ten year old studies doesn’t give me a huge amount of confidence in the reasoning behind decisions being made in 2017 after a major earthquake and resulting growth in areas like Rolleston and North Canterbury ,” he says.

The third report presented in 2014 was a desktop exercise and contained very high costs which now in 2017, are not correct.

The agenda for the committee meeting today states in its penultimate paragraph (#9):

“The long-term future of public transport may include rail. This should be a modern and comfortable service built upon proven demand.”

Tane Apanui challenges the CGPTJC to run a trial of a rail service from Waipara to Moorhouse Ave, or further to Rolleston, to prove the demand that the DASH Rail proposal says will be strong, and therefore warrant a more permanent passenger service for the people of greater Christchurch.

Dr David Lupton, former Manager Intercity with the Railways Corporation and now a transport consultant, has looked at the DASH proposal and says that the cost estimates seem reasonable and the methodology for estimating the revenue appear sound. His view is that given the low initial cost, the best way to be sure whether it will work would be to try it.

Find the report here (go to page 11 for DASH rail):

And DASH on Face book can be found at https://web.facebook.com/connectchch

From the report: (Tane Apanui’s responses are in italics)

6. Using the rolling stock suggested in the DASH Rail concept is feasible on the Christchurch rail corridor, however a number of issues remain, notably:

• Limited accessibility to the lines – platforms and stations would need building or re-instating at a number of key locations: of course there is some building / reinstatement required and there are some very cost effective, even mobile options that could be used. Communities have already expressed a keen interest in being a part of being a part of building a platform / space, in their own communities.

• Proposed equipment is old and access to spares is limited: There are 9 containers of spare parts available with the stock we have considered.

50 year old rolling stock may create reliability issues when breakdowns occur, which would have an impact on customers and the operation of pre-existing freight services on the rail corridor: The Dash proposal was a rough and ready, relatively cheap proposal hence the use of this stock. A newer stock could be used for around $1m more. When you consider that the one short segment of motorway the GCJPT committee recently voted to support as an addition on the Waimakariri bridge, will cost around $23m then it puts $1.8-2.8m for a passenger rail service into perspective.

• Traffic modelling shows that destinations within Christchurch are varied. Feeder bus services would be required to support travel to key destinations, involving multiple mode-shifts to complete a journey.

Again there is no detail or source references to support this comment. And what multiple mode shifts? Walking through the park to work from a stop in Riccarton? Grabbing a public share bike to get from a train stop in Papanui to work in Merivale? We must be allowed to have the conversation and consider the options and unfortunately this kind of comment is a barrier to that.