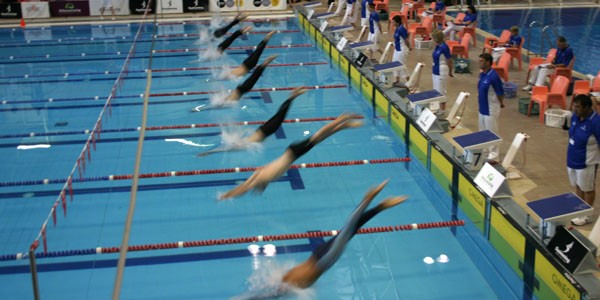 New Zealand swim coach Jan Cameron is delighted with the platform set eight months out from the Beijing Olympics.

Thirteen swimmers have qualified for the FINA World Short Course Championships at the Absolute Insurance Championships that finished at Waitakere City today.

Eight New Zealand records were established with a mix of the established stars and youthful talent in the team to contest the world short course championships in Manchester next April.

Cameron said the qualifying standard for the world short course championships were tough and close to the FINA A times set for the Beijing Olympics.

“We raised the bar and the swimmers really responded,” Cameron said. “I am delighted. I thought we might get up to 10 swimmers through but to qualify 13 is outstanding.

“It’s important that we continue to challenge our swimmers and to lift our standards in line with world times.”

Cameron said she was pleased that the proven stars like Helen Norfolk and Moss Burmester continued to show improvement, while the meet also unearthed the new talents of teenagers Hayley Palmer, 18 and Daniel Bell, 17 who both qualified for the world short course championships.

“That shows that our youth programme is identifying the very best talent and nurturing them well. It’s very encouraging to see the first two push through to the top level.”

There was one further New Zealand record and three qualifying marks set in today’s final session. North Shore’s Robert Voss, who qualified for the world championships in the 400m freestyle, broke Danyon Loader’s 10-year-old national record for the 800m freestyle. Voss swam 7:52.73, which was half a second under the old mark, which he set on the first half of the men’s 1500m.

Crack butterfly exponents Corney Swanepoel and Burmester duked it out under the world championship qualifying mark in the 100m butterfly. Swanepoel edged his clubmate in 52.20 with Burmester 7/100ths of a second behind.

“It’s great for both of us to be training together,” Swanepoel said. “We get to train and challenge each other every day which is great.”

Norfolk also went under the qualifying mark for the second time in winning the 200m freestyle in 1:57.66 to complete an outstanding meet with three qualifying events and two national records although she would have dearly liked to have added the 200m record as well.

“It’s Alison Fitch’s record and she was here today. I would have liked to beat it with her here. I went close today and hopefully I will do it at the world championships.”

Bell (West Auckland) was in the winner’s circle in the 100m backstroke in 53.16 which was 1.5 seconds inside his previous best. It was only 2/10ths outside the world championship qualifying time but it was good enough to ensure New Zealand will qualify a men’s medley relay for Manchester.

“I am going to use the world championships as a learning curve,” Bell said. “It’s my first major New Zealand team and it will be a great experience.

“I was not expecting to qualify but it all came off which is great,” said Bell, who also set an age group record in each of his six swims this week.

Swimmers who have qualified for the FINA world short course championships in Manchester from 9-13 April 2008: