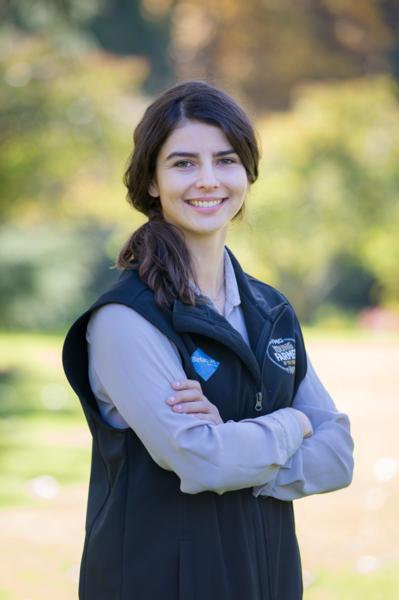 A Lincoln University graduate is one of only four women to ever compete in a Grand Final of the Young Farmer of the Year, starting this Thursday in the Manawatu.

First time competitor, 25-year-old Lisa Kendall, representing the Northern region, will be joined by fellow Lincoln University alumni, Andrew Wiffen from Tasman, and Nigel Woodhead from Otago/Southland along with four other finalists, as they battle for the national title.

Lisa owns and operates Nurture Farming Ltd – an ag support service company. She is driven and highly talented, and took the Northern regional final of the FMG Young Farmer of the Year by storm. Strong, determined and intelligent, Lisa demolished the competition and for those who know her, it has come as no surprise.

Raised on a lifestyle block, Lisa grew up in South Auckland with her lawyer mum and her father who was an electrical engineer but the city wasn’t for her as she set about becoming a farmer.

Following a Diploma in Agriculture and Farm Management at Lincoln University, Lisa worked on dairy and sheep farms and went to Thailand to volunteer in an orphanage.

A long way from being a top farmer, her parents thought she’d become a professional ballet dancer. Lisa was a very talented ballet dancer but eventually left the lure of the bright lights for the lure of the land. The change in direction wasn’t entirely unexpected as Lisa always watched Young Farmer as a child and made it quite clear that one day she would win it.

Beginning on Thursday, together with the other six grand finalists, Lisa will begin an arduous three days of fierce battles in order to be named New Zealand’s top Young Farmer.

On Friday, the contestants will battle exhaustion as well as each other in the gruelling practical day, which includes the Hynds Agri-sports Challenge where contestants race side by side in an Olympic worthy crowd drawing duel.

Con-currently, the AgriKidsNZ and TeenAg Grand Finals will take place with primary and secondary school teams from around New Zealand fighting it out to take back to their school the coveted titles. Lincoln University plays a key part in these competitions for younger students, and this year senior faculty members will present a soil science module with the University’s Land Management and Systems head of department Guy Trafford, and a team heading north this week.

The competition will be featured online platform via the NZ Young Farmers YouTube channel and on the YF Facebook page.  For the first time, viewers will be able to see a mixture of livestream and pre-recorded clips as the competition progresses.

It will also be featured on Country TV on Thursday 13th July at 7.30pm.

How the FMG Young Farmer of the Year works:

400 contestants competed in 22 District Contest and Skills Day nation-wide where they can opt to 'Have a Go' which means they cannot progress to the next level – or they can enter competitively.

The seven winners of the regional final will now compete at the Grand Final in the Manawatu this week.

In 49 years only four females have ever made the Grand Final:

TeenAg aims to introduce and promote a positive picture about agriculture and agricultural careers from an early age. The goal is to show the stimulating and fun side of agriculture to students from all walks of life, you don't need to be off a farm, you just need to have a love of the land and be keen to get your hands dirty.

Participants can become members of a TeenAg Club through their school or can join when they compete in the TeenAg Competitions. Member details are recorded on our national database and they are the first to receive notification of all the latest TeenAg events and other information.

Lincoln University has always been involved and contributed to TeenAg, which is a key introduction to high school students.