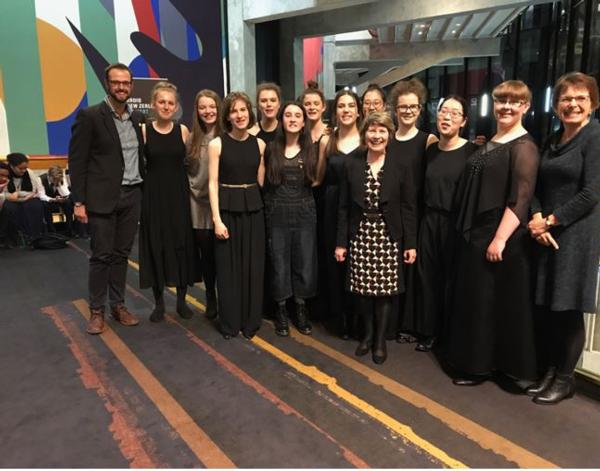 Rangi Ruru students and staff at the competitions in Wellington CREDIT: Supplied

Rangi Ruru Musicians Excel at a National Level Once Again

Rangi Ruru Girls’ School has won two gold awards in the 2017 Chamber Music NZ national schools competition, at the weekend in Wellington. They were the only South Island school represented in the top six.

There were six gold awards up for grabs, and Rangi’s Buda and the Pests (Isabella Gregory, Jessie Anderson (pianos), and Valerie Xiang, Holly Evans (percussion) ), won a cash prize of $800 for their win. They were also the National KBB Award winners, for a group containing any of woodwind/brass/percussion.

Director of Music at Rangi Ruru, Janet Kingsbury, says the standard in this prestigious competition is incredibly high.

“These girls were all stunning not only in their performances but also in their engagement in the whole spirit of the weekend. They have all put in huge hours in preparation towards this event, and represented themselves, and Rangi, with pride and dignity. We are all very proud of them.”

Mrs Kingsbury also offered congratulations and thanks to Mr Thin, co-tutor of Buda and the Pests, and part of the amazing support team prior to and during the weekend in Wellington.

Rangi was the only school to have three groups at the Nationals. Full results can be seen at http://www.chambermusic.co.nz/2017-contest-results