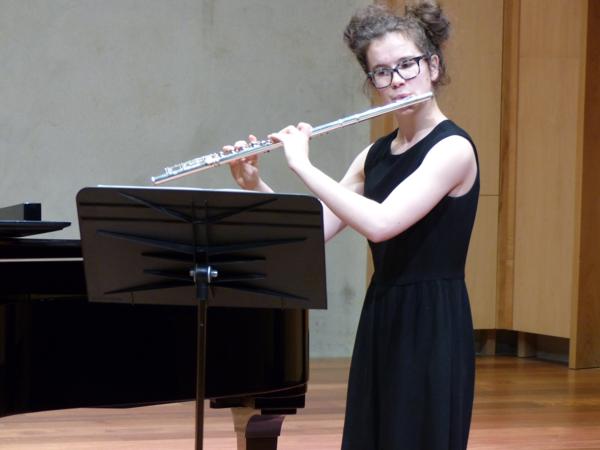 Flautist and Year 13 student at Rangi Ruru, Isabella Gregory, has again impressed audiences at a public concert at The Piano in Christchurch.

Gregory, who is a student of CSO principal Flute Anthony Ferner, performed as a part of the Outstanding Young Musicians performance, presented by Concerts for Christchurch Foundation Trust, which showcased the talents of Gregory (flute), with her accompanist Tim Emerson (piano), and Matthew Lee (flute).

Music reviewer Patrick Shepherd has written, “(Isabella) is a remarkable young performer” …….” and she tackled works that far exceed what one might expect from someone 17 years of age”. He goes on to say of her musicianship, that her “agility………was extraordinary and her sound filled the hall.”

Isabella has had an outstanding year, which kicked off with her being named as one of two new Christchurch Symphony Orchestra Interns for 2017 giving her the opportunity to perform in the CSO and receive lessons with section principals.

She has been achieving at a high level for several years now, with positions in the NZSO National Youth Orchestra, National Youth Concert Band, and the NZ Secondary Schools Symphony Orchestra (NZSSO). Isabella was an active participant in this year’s Canterbury University International Flute Symposium, and in the middle of the year travelled to Brisbane for the Australian Flute Festival.  At both events she received lessons and had masterclasses with some of Europe’s, the UK and Australia’s foremost teachers and players.  Isabella is also a pianist, having performed and won awards in the district, regional and national finals of the NZCT Chamber Music Contest over the past two years.

Director of Music at Rangi Ruru, Janet Kingsbury, says, “Isabella is an exceptionally talented young musician who impresses all who have the privilege of working with her and hearing her perform.  She is one of Rangi’s top academic students, and is also the student Head of Sustainability, a position she holds with dedication and pride.”

Isabella is currently sitting Level 3 NCEA and Scholarship examinations in six subjects, and we look forward to hearing her results early in 2018.  She has been awarded a Vice Chancellor’s Excellence Scholarship for study at Victoria University next year.

“Gregory is a remarkable young performer” with “dazzling displays of brilliance”. Patrick Shepherd

During the year we have caught glimpses of flautist Isabella Gregory, first playing flute in an ensemble from Rangi Ruru School then piano in a concert by students of Rosemary Stott.

On both occasions she acquitted herself well but today was her chance to shine in the limelight in a solo programme.

Gregory is a remarkable young performer, another fine flautist from tutor Tony Ferner, and she tackled works that far exceed what one might expect from someone 17 years of age. For me, the telling signs were not in the flash and dazzling displays of brilliance but in the musical understanding that underpinned her performance. For instance, Mozart’s Andante in Copened the concert – it is fairly standard fare for flautists of a reasonable standard, but Mozart needs so much more than just the notes. Often restraint is needed and I love it when Mozart is presented in an uncluttered and unfussy way like this, with just the right amount of vibrato to enhance the line. Gregory judged this extremely well and it served as the perfect entr’acte for what was to come.

I believe that there is a special affinity between French composers and the flute. Dutilleux’s Sonatine just adds further proof to my argument, with an engaging mix of sumptuous harmonies and quirky melodic ideas hinting at a more contemporary idiom, this was a real charmer that never let up in its activity. A showcase for Gregory absolutely, she handled its many challenges well but Tim Emerson also had his work cut out for him at the piano. As in all his accompanying, he was meticulous and did a splendid job.

Rounding off a cracking concert, Matthew Lee joined the duo for Doppler’s Andante and Rondo for Two Flutes and Piano.  This was another endearing piece, with the two flutes complementing each other perfectly, their tones working well in close harmony, the rondo a showpiece full of character – total froth but a nice way to end.