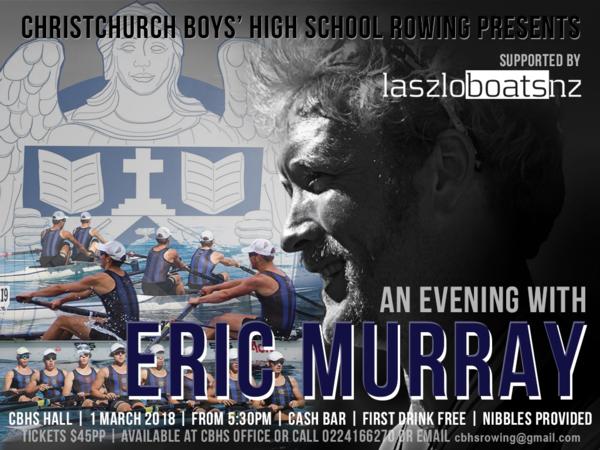 Want To Go Up Against a World Champ? Now's Your Chance!

Christchurch Boys High School has announced an outstanding fundraising event for next month, as the lead up to the Maadi Cup ramps up.

The school is hosting world champion rower Eric Murray at an evening that will see a CBHS squad member take the gold medallist on in a head-to-head Erg challenge and people attending the function will be invited to guess how close the CBHS rower can get to Eric’s time. A prize will be given to the best guess.

Fundraiser organiser Marco Woelders says with the boys and parents living and breathing rowing over the last few months and that will continue until the Maadi in late March, everyone is looking forward to the evening with an outstanding athlete like Eric Murray.

“This guy is a legend,” Marco says. “It’s always inspirational to hear from someone who has achieved an incredible amount with such dedication and focus, and we have no doubt tickets will all sell out.”

“We will also name the two newest Laszlo boats joining our fleet ready for racing at the SISS and Maadi Cup this year,” says Marcos.

Tickets can be purchased from the CBHS office off Straven Road or alternatively by contacting Ricardo De Sousa cbhsrowing@gmail.com or ph (022) 416 6270 with any queries.

The cost is $45/pp and includes the first drink. Nibbles will be provided.

Ticket cost is $45/pp and include your first drink. Nibbles will be provided with a cash bar.

His school was not one of the traditional rowing schools, but Paula Twining was in his year and enjoyed successes at New Zealand championships, which gave inspiration to other novice rowers.

Murray first went to the Maadi Cup, New Zealand's premier school rowing regatta, in 1997, but did not achieve anything at Lake Karapiro. In 1998, when the regatta was held at Lake Ruataniwha, he came third in the U16 double, and second in the U16 quad.

He was in his last year at high school in 1999, and at that year's Maadi Cup, he won the U-17 quad national title. After their 1999 success, their trainer, Charles Haggie, introduced them to people in the rowing scene so that they would end up with one of the dominant rowing clubs at the time after they left school.

Murray has also represented New Zealand at two Olympic Games as part of the coxless four, coming 5th in the A Final at the 2004 Olympics and winning the B Final for a 7th place overall in 2008.

In late December 2011 Murray set a new world record on an indoor rowing machine. On a Concept 2 Dynamic Rowing Machine Murray went 18,728 m in one hour. The story was featured on Television New Zealand.

On 17 January 2012 Murray raced five-time men's single scull world champion Mahé Drysdale in the single scull event at the North Island Club Championships and won by less than half a second. Drysdale and Murray were the only two scullers in the event due to inconsistent crosswinds.

At the 2012 London Olympic Games Murray and teammate Hamish Bond took six seconds off the world record to 6:08.5 in their heat for the men's coxless pair. In the Olympic final Murray and Bond surged into the lead after the 500 metre mark to win the gold medal in 6:16.65 by open water. France edged Great Britain for the silver in 6:21.11 v. Great Britain's time of 6:21.77.

The victory capped an undefeated streak that began when Murray and Bond began racing the pair internationally in 2009. After the Olympics, Murray underwent minor knee surgery and announced that he would not be available for international competitions in 2017, whilst Bond announced in November 2016 that he would take a break from rowing.[17]

In the 2013 New Year Honours, Murray was appointed a Member of the New Zealand Order of Merit for services to rowing.