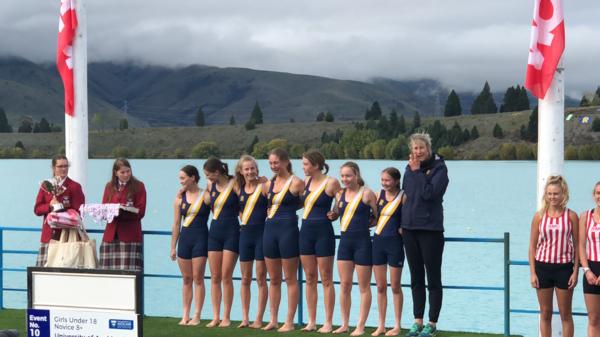 Christchurch’s Rangi Ruru Girls’ School has retained their title as top girls’ school in rowing for the third time running at the Maadi Cup Regatta on Lake Ruataniwha.

It was close though, with the blue and golds beating Waikato Diocesan Girls’ by just 1 point as the regatta wrapped up after a week and weekend of heats and finals.

Rangi rowing coach Mark Cotham says the news has been sweetened by selection of Isabella Carter to trial for the NZ junior squad and four other Rangi rowers (Millie Knight, Amber Williams, Alice Graham and Emma Stephens) will trial for the South Island U18 crew set to race against a North Island equivalent.

“Isabella is one of only three sweep oar women from the South Island rowers to be selected to trial for the team and was selected last year for the New Zealand U17 Girls’ Sevens team which played in the World Schools Sevens tournament in December against teams from Australia, Japan, Tonga and Samoa. She's a talented young woman,” he says.

Rangi Ruru won 3 gold, 3 silver and a bronze medal in the Maadi Cup regatta and Cotham has paid tribute to all the rowers and coaches who he says have worked incredibly hard this year and will no doubt all be keen to take a well earned break after another intense and ultimately successful rowing season.