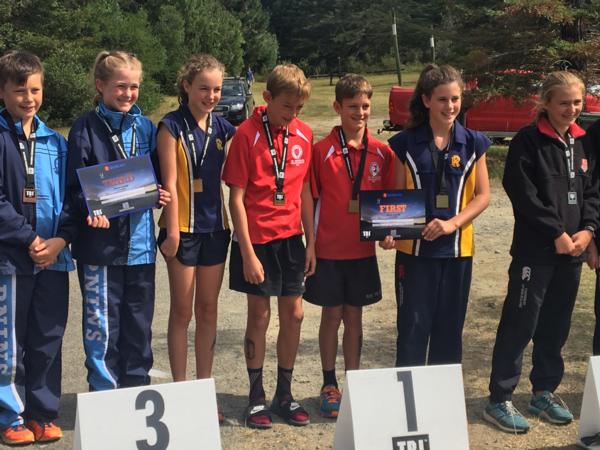 Lily Greenwood won the U12 girls age-group and then she and schoolmate Milly Gallagher combined with two boys from Medbury to win the 2018 NZS Tag Team Tri Under 12 section.

This year the championships on March 19th and 20th took place on Rabbit Island where hundreds of competitors from around the country took part, usually very serious competitors with the vast majority from the North Island.

The Tag Team event sees each member completing a shortened individual triathlon, tagging to the next member to complete their section – tagging is passing a timing chip on.

Head of Sport at Rangi Ruru, Jo Fogarty says the Rangi / Medbury combined team was incredibly strong, winning the under 12's section by more than 6 minutes.

“The girls have credited Rangi cycling coach Marc Prutton wind training sessions with helping their competitiveness in this section,” she says. “The girls must also take credit of course for a focus and determination that together with their exceptional athletic ability has achieved this win; no doubt about that.”

Lily’s mum Liz Greenwood says her daughter loves the sport as it provides variety with the three disciplines.

“You need to be good at a mix of sports which Lily is. Her goal is to be able to join the Canterbury Tri Academy (open to 14yrs plus) and then compete for New Zealand in age group events later in high school. Andrea Hewitt is her idol who she often sees training at Jellie Park. We are so proud of her and thrilled that she can be supported so well at Rangi to achieve in her chosen sport.”