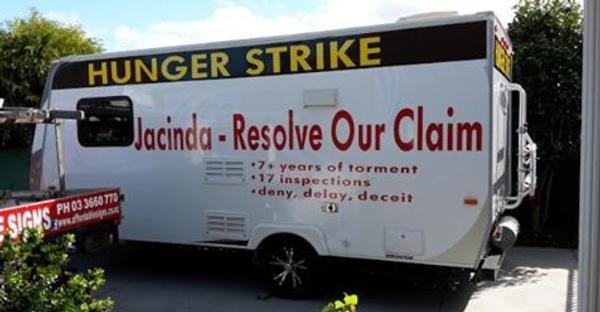 The caravan that Peter Glasson will stay in for his hunger strike CREDIT: supplied 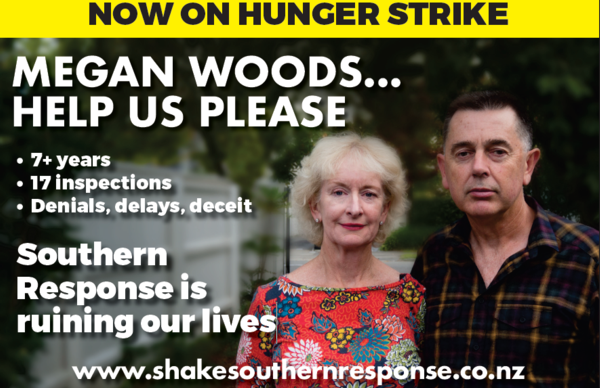 A Southern Response earthquake claimant is starting a hunger strike tomorrow outside the Government insurers offices in Show Place in Christchurch.

It’s not a decision that has been taken lightly but Peter Glasson, who was also spied upon by Southern Response, says he and his wife Anne have been left with no choice.

“We are seven years on and despite repeated requests made to Government-owned insurer Southern Response to discuss claim settlement, they will not talk to us. We have had enough of the tactics that SR is using to refuse to resolve our claim,” he says.

“We were in Court ready to proceed on a hearing of our case on 13 November last year then two days prior to the case starting, Southern Response offered us less than half of what they had offered us previously, simply to intimidate us before the hearing. The intimidation and bullying tactics by Southern Response are never ending,” says Peter Glasson.

The Glassons have been informed that their court hearing, which has been filed in the courts since May 2016 will be at least a year away, and possibly longer, as a result of what Peter calls, “outrageous delaying tactics and cunning manipulation of the process” by SR’s lawyers.

“Things like changing experts in order to get the answers they want and manipulating the Court process to slow things down, and those are just two of the tactics they are using. Southern Response is ruining our lives, affecting our health but we will not let them finish us off,” he says.

Now five months later, and after the trial was supposed to have taken place, Southern Response want to visit the Glassons’ house with another 12 people to undertake further investigations.

“Southern Response and its various engineers and experts have already undertaken sixteen separate visits of the house.  They have now requested a seventeenth site visit with engineers who have already been to the house six times. This is simply intimidation in a war of financial and psychological attrition,” he says.

The Glassons say they have gone above and beyond to assist the resolution of their claim – they’ve followed all the processes they should have and spent a massive amount of money along the way – necessitating the need to take out a mortgage on their house.

Peter is now taking control of the situation himself saying he will no longer be bullied and intimidated by Southern Response.

“I will continue this hunger strike, no matter what the personal consequences, until I have achieved resolution of our claim with Southern Response”.

Peter and Anne Glasson’s house suffered considerable damage in the Christchurch earthquakes in 2010 and 2011.  EQC undertook cosmetic repairs in 2013 but made no attempt to assess the damage to the foundations. Further investigations paid for by the Glassons revealed much more serious damage that EQC had never assessed let alone repaired.

The Glassons’ experts say the house needs new foundations to repair their house to the “as new” standard of their insurance policy. Southern Response at one stage agreed with the Glassons that this was the case, and then changed their minds, saying that they believed the house required only very minor repairs to the foundations. The Glassons put this change of position down to Southern Response trying to save money on the repair.

Hundreds of claimants are still battling Southern Response and millions of taxpayer money is being spent on lawyers who obfuscating and delaying the process – money that could be being spent on settling the insurance claims.

Instead Southern Response just pushes on with legal action with and continuously plays legal games to delay the process.

Peter Glasson says that the claim could be settled in a day if Southern Response had a willingness to resolve the claim.