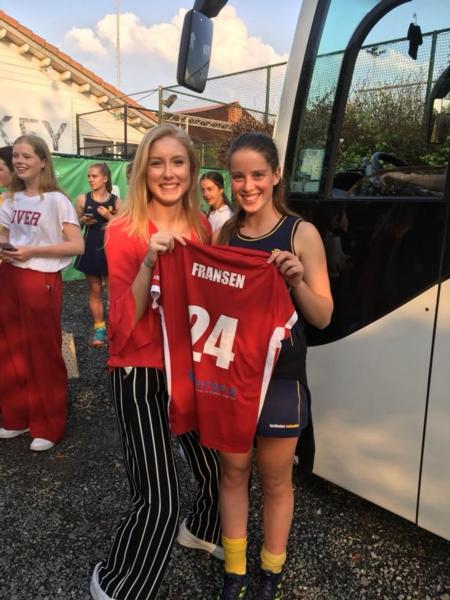 Swapping jerseys - Rangi Ruru's Claudia Reid (on right) with her Antwerp U19 team opposite CREDIT: supplied

Sixteen hockey players from Rangi Ruru Girls’ School are currently in the middle of a two week tour of Europe.

Director of Sport Jo Fogarty says after a massive fundraising effort and a lot of hard work, the group is thoroughly enjoying the competition which is seeing them play top club teams in the UK, Netherlands and Belgium.

“Experiences like this are key to extending our players’ horizons beyond New Zealand, so they experience first-hand the rigours of international competition,” she says. “We are delighted to be visiting some of the best hockey nations in the world, learning the insights and local knowledge both on and off the hockey field.”

“The temperatures have been really warm, in the late twenties, and today was no exception. After the match we all came together for dinner and a few games with a bit of dancing to finish off the night, the Belgian girls were awesome hosts and we were able to trade some of our tops with their playing strip which was very special.”

Jo Fogarty says the Rangi girls are embracing every game, every opportunity to learn and experience playing these top teams. “We are all constantly learning,” she says.

The group left Christchurch on the 11 April and return on the 26 April.

They will be in London for ANZAC Day and Jo Fogarty says they are all looking forward to taking part in official commemorations with other Kiwis and Londoners alike.