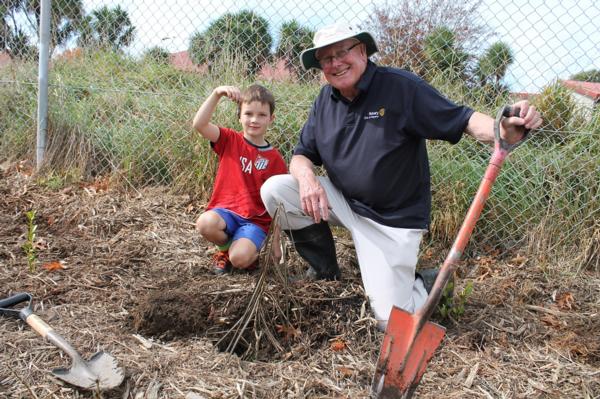 The Papanui Innes Community Board today hosted community groups and local school students for the first stage of an historic replanting in Papanui.

Stage one of a two stage plan to replant Papanui Bush on Bridgestone Reserve got underway at 12 noon today. A second day is planned in early June. The first planting covers 1100m2 and the June planting, 1000m2 at the north and south ends of the reserve (that’s about 1520 native trees, including 70 Totara)

The first tree to be planted was a 3-year-old Totara that grew from the seed of a 120 year old Totara from Riccarton Bush. With Papanui Bush and Riccarton Bush the two largest native bushes in Christchurch 120 years ago, the link is important.

Resident Ron Sedgley, who graduated from Papanui High in 1955, was part of the crowd helping to plant the reserve today.

“I’ve lived around here all my life - 50 years in the same house. I'm here to leave a legacy. I chose a Totara to plant as its slow-growing and has a lot of history. I'd like to see Papanui Bush regenerate,” he said.

Papanui Innes Community Board Chair Ali Jones says it was a really rewarding day for everyone involved.

“I believe the last tree was cut down in what is now known as Bridgestone Reserve on Langdons Road in the 1860s and the local Community Board is thrilled about working with the community to reinstate the natural flora,” she says.

“To have community groups, local students and the council involved is key to the success of this project,” Jones says.

Another gardener today was young Vesper who turns 9 in two days. Her grandmother said they came to the planting with family members as part of her grand-daughter’s birthday celebrations.

“We've come here today for Vesper’s birthday and she's vowed to come back when she turns 40 to see how these trees have grown" says Grandmother Robin Taylor. Vesper though says "it seems like a long way away".

It may seem like a long way away but at least with the first step taken, the regeneration of this important bush is well on the way.