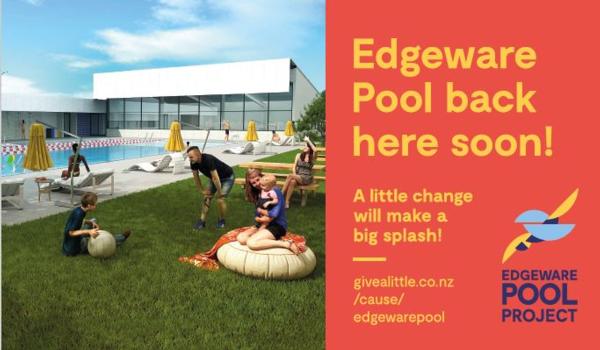 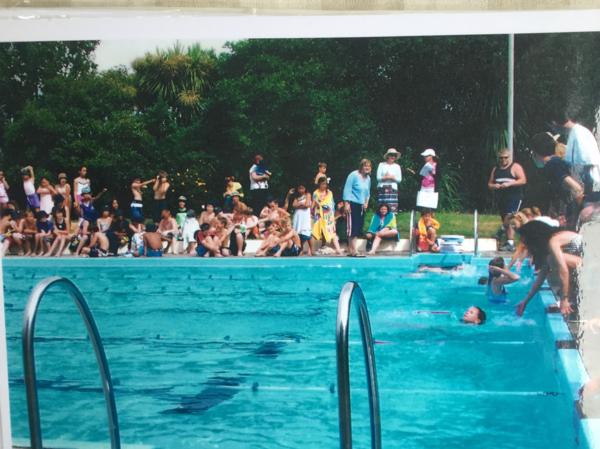 The pool planned for Edgeware is out of the starting blocks.

A Give a Little campaign will be launched on Monday 18 June at the same time a new logo for the pool is unveiled at the old pool entrance on Edgeware Road (opp Caledonian Road) at 1230pm.

Pool spokesperson Paul Somerville says the support from well-known award-winning design agency imagic is providing a professional edge, to this important part of the pool project.

“Raising money is obviously key to the success of getting Edgeware Pool open,” he says. “We have a much smaller budget than other proposed pool projects around the city however it’s still a significant amount of money.”

The pool has a budget of $5m which includes a 14m indoor pool and a 25 metre outdoor pool with a landscaped grassed areas for families and swimmers to enjoy.

“We have already raised more than $150,000 to fund the project to this point, as well as an equivalent amount in pro-bono services and consultancy fees which was needed to get the Resource consent. We are extremely grateful. And now imagic is doing this pro bono which is extraordinary,” says Somerville.

imagic account director Tim Thomas says the agency feels particularly excited about being involved in the project as they are not far from where the new pool will be located.

“We are on Colombo St, on the Edgeware side of Bealey Avenue just down the road from where the new pool will be. We are looking forward to popping up the road for a swim at lunchtimes,” he says.

Thomas believes it’s important to contribute where possible to the local fabric of a community and he is confident the much-anticipated pool will be well used.

Paul Somerville says there’s a sense that a new pool on the original site will heal the hurt which resulted from the council closing and subsequently bulldozing of the pool more than a decade ago.

“The original Edgeware pool was built in 1934 after a major fundraising drive by locals and was run by the St Albans Swim Club until the council took over its management in 2002. The rest they say, is history and with so many pools in schools no longer operating, the importance of exercise (and access to facilities), and the number of young people who can’t swim, we believe the need for this facility grows every year,” says Mr Somerville.

One of the longest members of the St Albans Swim Club and president for many years, Brian Gardner, will be at the launch as will local MP Duncan Webb, city councillors, community board members and other supporters from the community.

The pool has always been a hive of community activity and connection, with fundraising often a focus for members and the wider public. This is from the April 2010 St Albans News:

The highlight of the season was a successful “Safeswim” swimathon as reported in a Royal Lifesaving Newsletter:   “At 6pm on Saturday February 6th 1993 the St Albans Swimming Club started their Swimsafe event. Members camped at the pool and ensured swimming continued throughout the night — Councillor Graeme Elmsly was seen swimming 30 lengths just after midnight — the Fire brigade and the local MP David Caygill were in the novelty swims and younger children swam widths.

A barbecue finished a fun weekend — 45 people swam almost 65km, more than 2000 lengths and raised more than $800. A great total and just as importantly a great family event for the club.”"

In the 1997/98 summer, the CCC conducted a survey of Edgeware Pool users after one of the busiest seasons ever. Some of the results:  main reason for using the pool: 65% recreational swimming; 35% lane swimming. Most pool users were from St Albans 34%; Shirley 13%. They rated as excellent: cleanliness of pool grounds 54%; water quality 58%; safe environment 42%; value for money 49%; staff 57%; water temps 85%.

One of the most repeated comments was: “it’s the best and cleanest pool in Christchurch.”

After an association with the club for ten years, Brian Gardner became President for the 1996-97 season, which started with the usual working bee.