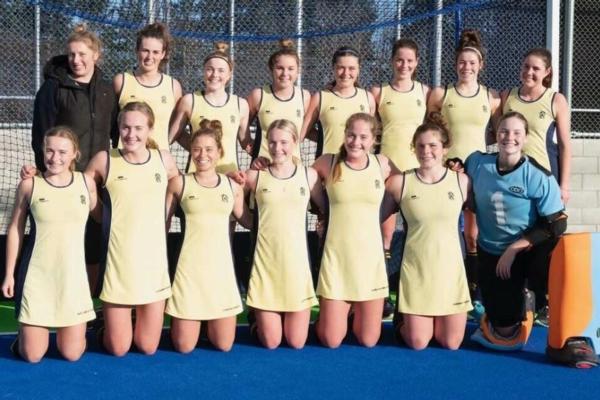 Rangi Ruru's 1st IX Hockey Team: Anneka is beside the goalie (in the blue). Abby is behind the goalie on the end of the row, and Britt is beside her. CREDIT: Ken Baker Photography

A trio of hockey players from Christchurch’s Rangi Ruru Girls’ School has been selected to attend the NZ U18 Development Camp from the 15th - 21st of December.

Brittany Wang, Anneke Calder and Abby Lennon were all named in the announcement this morning listing the top 32 players in the country who will attend the camp; Rangi Ruru has more players going than any other South Island school.

Rangi’s Director of Sport, Jo Fogarty, says she is incredibly proud of the girls.

“Being invited to attend the camp is a huge honour,” she says. “I see how hard they work and they are so passionate about their hockey, making no bones about what their aspirations are. They have now been recognised as our top players and we are delighted for them.”

Fogarty says a lot of young sportswomen choose Rangi Ruru because of the very successful sports programmes, including hockey, and seeing these senior girls achieve at this level is inspirational for the younger players coming through.

“This is huge for them, they see what is possible and playing alongside the older girls, being coached by them - when they see what Anneke, Abby and Britt have achieved, it makes these kinds of opportunities so attainable and possible.”

Prior to the Federation Cup in the first week of September (New Zealand’s premier secondary school girls’ hockey tournament) the Rangi 1st IX heads into the business end of the School Premier hockey competition, where they currently sit at the top of the table having not lost a game so far this season.