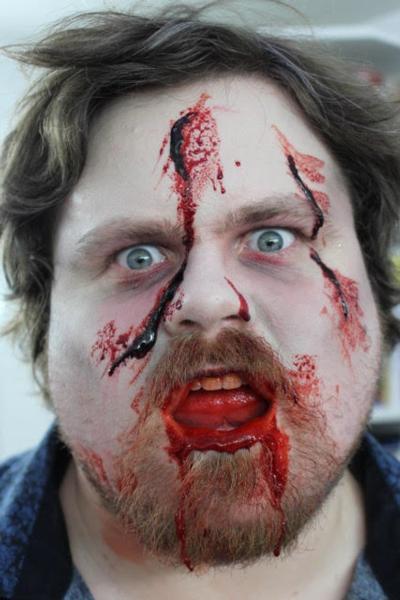 An example of Minifies makeup for the ChCh Zombie Run CREDIT: Supplied

Zombies, a Circus of Horrors and a roving scary story vending machine are only three of a number of spine-tingling selections being brought to Christchurch this Halloween weekend.

Festival of the (Un) Dead (FoUND) Event Organiser, Andy Bridgen, says the success of the global synchronised dance phenomenon Thrill the World last year, which saw zombies descend on Cathedral Square, screamed to be fleshed out into a bigger event.

“Halloween is such an exciting time of year - no matter what your age. It’s an excuse to dress up and inhabit a different character for a while, and who doesn’t love that?” says Andy Brigden.

“Last year we had such a blast with Thrill the World, but the event was over in a couple of hours. We had all these zombies dressed up with no place to go. It made perfect sense to combine the dance event with the Zombie Run which has been successfully run at other times of the year in Christchurch. The idea to create a whole festival of the undead just kept growing from there,” she says.

The programme is bulging with offerings including two sing-a-long Rocky Horror Picture Show events at the Isaac Theatre Royal (one has already sold out) the genius of Rollicking Entertainment, local world-class talent Lizzie Tollemache and David Ladderman will bring their Circus of Horrors – a Halloween Cabaret - to the Isaac Theatre Royal stage; and their kids show ‘Trick or Treat’ will showcase the new performance space inside the Tūranga Central City Library.

Andy says it’s really exciting to be using new spaces like Tūranga and Little Andromeda, the pop-up theatre space being set up by Michael Bell.

“This is a wonderful collaboration. We are working alongside the Central City Business Association, ARA, the City Council and wider performance sector including the Isaac Theatre Royal, and a number of outstanding performers.”

Bridgen adds that she and her team at Out East Creative, expect FoUND to become New Zealand’s annual Halloween destination event for zombie lovers and fun seekers.

“It’s a bit of a cliché but it’s true; there’s something for everyone; music, dance, circus, theatre, film, visual/performance art and spectacle: all tied into edgy themes of ghosts, ghouls, zombies, the strange and mysterious,” she says.

With a series of ticketed and community events on offer over a single hair-raising weekend from Friday 26 to Sunday 28 October, FoUND provides something for everyone - for example, an all-ages Skeleton Hunt, organised by students on Ara’s Event Management Diploma course will take kids and their parents into selected shops and cafes to collect clues and loot, while the Christchurch Zombie Run gives adults a chance to fulfil their post-apocalyptic dreams as they outrun the undead.

The full programme of events is available at facebook.com/foundchch