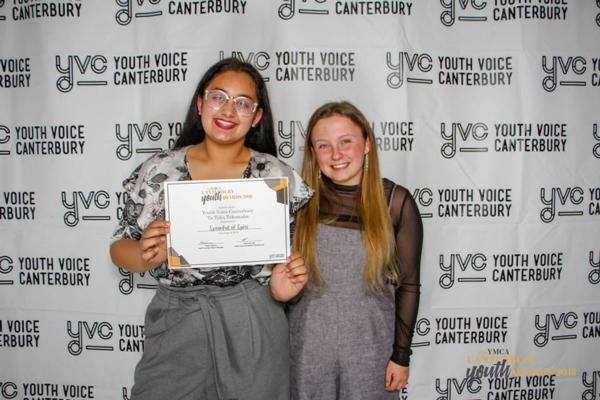 Tulsi and Lucy at the Youth Awards CREDIT: Supplied

Student's Social Enterprise Breaking Down Barriers One Meal at a Time

A refugee and immigrant focused cookbook, ‘Spoonful of Spice’ created by a group of Year 12 Rangi Ruru students, will hit the shelves in the next few weeks.

The 100-page cookbook is a result of the students’ involvement in the Lion Young Enterprise programme, and what began as an embryo of a commercial idea quickly developed into a passion project for these four young women - Lucy Johnson, Tulsi Lathia, Sarah Lawrence and Victoria Park.

Teacher in charge of Young Enterprise at Rangi Ruru, Jacqui Griffith, says this has been a real opportunity for the girls to put their skills to work.

“These enthusiastic young women began the year with a vision of exposing the difficulties migrants have faced on their journeys to start a new life,” she said. “And that’s precisely what they’ve achieved. But more than this, it has also been an opportunity for the girls to develop and exhibit their leadership and entrepreneurial skills.”

The four girls first established contact with a group of refugee and migrant women six months ago and organised a series of potluck dinners where the women prepared and served traditional meals from their homelands. Recipes for these dishes accompanied by interviews with the women about their backstories, are recorded in the published cookbook with the aim of breaking down the barriers between migrant and refugee communities and locals.

“It’s hard when you feel so isolated,” said the group’s CEO, Lucy Johnson. “People really wanted to share their recipes and their stories with us, and in publishing it [the cookbook] we’re helping break down the barriers that exist between our communities.”

The girl’s initiative hasn’t gone unnoticed either, receiving funding for their venture in the form of a number of monetary awards including the YHA New Zealand Cora Wilding Award, Coffee Culture Local Hero Awards, and the YMCA Youth Voice Awards. The funding has allowed the girls to publish the first 300 copies of their book without cost, while they have saved money elsewhere by doing all the photography and design work themselves.

The cookbook will be printed in time for Christmas with pre orders being taken now.  Orders can be placed by emailing the school office@rangiruru.school.nz The team is also in conversation with a number of local businesses to stock their cookbook.

The girls have recently presented their refugee cookbook venture for judging as part of the Lion Young Enterprise Regional Finals; the winners of which will compete in the Nationals in Wellington.

Regardless of the outcome, however, ‘Spoonful of Spice’ will keep on giving with talks of demonstration evenings with the migrant women, and a possible second edition.