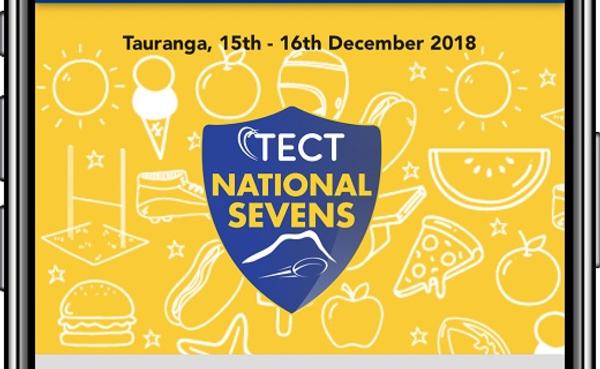 Toi Ohomai’s IT and computing students have collaborated with Bay of Plenty Rugby to create an app for the weekend's TECT National Sevens.

The tournament will take place at Tauranga Domain on 15 and 16 December and will see 16 provincial unions who qualified at the Northern, Central and Southern Regional Qualifiers battle it out on the rugby field for the top honours.

Toi Ohomai students Peter Bowman, Kimberley Mackay, Corban Hirawani and Jackson Currie put their collective skills together to create a first-ever app for the tournament. The app was built as a PWA (Progressive Web App) – a new technology that enables websites to load faster on mobile devices and that can show content even without an internet connection. This will allow spectators and fans to effortlessly keep track of scores, pool games and elimination rounds during the tournament.

Toi Ohomai Senior Academic Staff Member Jeffrey Kranenburg, who acted as the students’ supervisor and mentor throughout the project, says the project was a great opportunity for students from different locations and skill levels to collaborate and experiment with new innovative technologies.

“We want to enable our students to use these new technologies and it’s great that we could demonstrate their capability on such a relevant real-life example,” says Jeffrey.

“We’re all excited to see the app in action. I wanted the students to learn to work with other people to develop their collaboration skills and if this goes well, maybe we’ll do it again next year!”

Jackson Currie, who completed his New Zealand Diploma in Web Development and Design (Level 5) this year, says he is excited to see the app in action.

“It was great to work with everyone, other students and our lecturers and I loved putting my skills to the test on something we will actually see people using it – hopefully it will be fantastic!”

The TECT National Sevens Rugby App can be downloaded for FREE at nationalsevensapp.nz from 13 December.