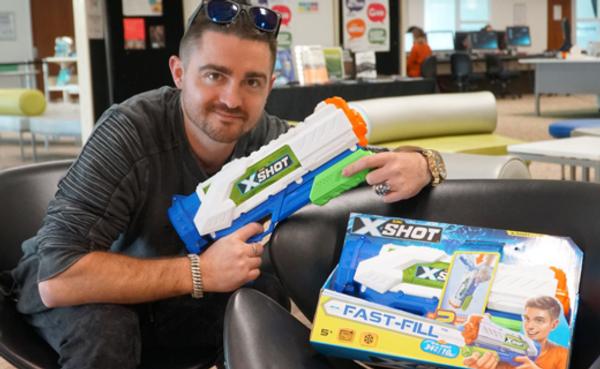 Andrew Parker has been inventing gadgets since he was a child and now finally one of his ideas is about to go global!

The 32-year old Tauranga man, and Toi Ohomai IT graduate, has invented a ">fast-filling water gun that, after a three-year journey, has been taken to market by New Zealand toy giant, Zuru. The ‘XShot Fast Fill’ is now available at Kmart and The Warehouse in New Zealand, leading toy stores in England, South Africa and Australia, as well as in Walmart in the United States and online via Amazon.

“It’s pretty cool,” says Andrew casually. An understatement, especially when you consider how the idea for this particular project came about.

“It was summertime 2015 and my son wanted to have a water fight,” Andrew recalls. “I was recovering from a broken neck and wasn’t very mobile – he was too young to fill the water gun himself and I was struggling to fill it for him. That’s when I had the idea for a rapidly filling water gun.”

Andrew took to his shed and created a prototype which filled up with two litres of water in a flash – a toy children can easily fill themselves, rather than having to wait for their parents’ help.

“I’d been coming up with ideas since I was a kid, but I didn’t really have a lot of motivation to do anything with my designs. After I broke my neck though, I thought ‘I’m disabled now, I have to get something done for my family.’”

The road to entrepreneurial success is wild and bumpy and Andrew’s water gun stayed in the shed while he thought about what to do with it.

His next move was to enrol in the Diploma in Applied Computing with Toi Ohomai and it was there that he came across a summer scholarship programme, Project Ignite, which helped his creation come out of the shed and take a step closer toward the production line.

“My tutor at Toi Ohomai told me about Project Ignite – a $5,000 summer scholarship that helps students bring their ideas to market. I was a successful applicant and never looked back. We had mentors with business experience that guided us in all areas of entrepreneurship. It was a really sound programme and I made a heap of contacts.”

With that experience under his belt, Andrew was ready to take the idea to investors. So he contacted Zuru (an award-winning company that designs, manufactures and markets innovative toys and consumer products), obtained a Skype interview and now, nearly three years later, Andrew is thrilled to finally see the water gun on shelves.

But Andrew isn’t stopping there – he has 16 other toy ideas ready to go, not to mention a book with 50 other inventions.

One of his ideas is a ‘last man standing’ computer game, which is currently being coded and developed by a team that includes students from Toi Ohomai’s computing courses. Another is an idea for a fuel-less generator, a concept Andrew says he has received good feedback on so far.

“I completed six months of the NZ Diploma in Engineering (Mechanical) before I was forced to withdraw due to spinal surgery. They cover some amazing stuff though; one of the courses was about how metals work – I used that knowledge to connect the dots for the generator design.”

Andrew is reflective of his well-deserved success:

“There were some critics, but talking to people about your ideas and collaborating with others is key. That, and you have to stick to your guns.”