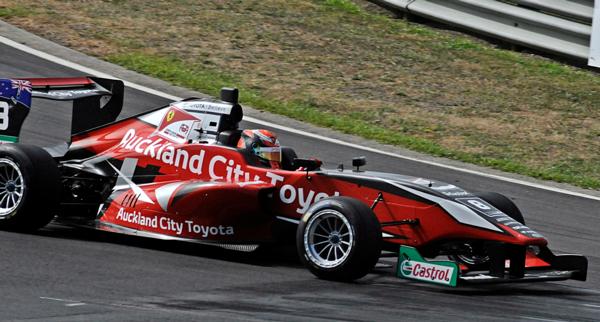 After two southern rounds, Armstrong arrived at this weekend’s Hampton Downs event tied on points with Pukekohe’s Liam Lawson. Though Lawson finished ahead of Armstrong in Friday's 20 lap race – a ‘make-up’ for one postponed due to high winds at Teretonga – he tapped the car of race leader Cameron Das and crashed on the final lap while doing so. Armstrong avoided the mayhem - preserving both his tyres and his car - but was penalised for passing under a yellow safety flag.

Back in action this morning, Armstrong dominated the 15 minute qualifying session and was the only driver to lap the circuit in less than a minute.

Raoul Hyman landed beside him on the grid, with Lawson relegated to the second row and right behind Armstrong. A clean start put these three in line astern, with Hyman fending off repeated attacks from Lawson. Behind them there was once again mayhem. At the hairpin Petr Ptacek chanced a doomed overtake going into the hairpin, trying to pass Artem Petrov. Both cars went off and causing the first yellow flag of the race, leading to a red flag restart. Brendon Leitch went off, rejoining last.

Even with the field banched back up by the safety car the Hyman-Lawson battle slowed the leaders enough that Armstrong was able to draw clear and his dominance was transformed into a race win on lap 17 of 20 when Dev Gore and Brendon Leitch tangled in a battle for tenth place. Gore went off the track, becoming stranded in a dangerous position and bringing out the safety car while Leitch pitted for a new front wing.

The race ended under the safety car, not the way any race driver wants to win but handing Armstrong the points advantages he deserved.

The six races held to date have been won by Lawson, Armstrong, Leitch and Artem Petrov. Armstrong is the first to win from pole in this year’s championship.

Statistically, the leading five or six drivers at this point are those who have the best chance to take the crown. Often, the driver who leads at the championship midpoint – tomorrow morning’s race – is also crowned champion two weeks later.