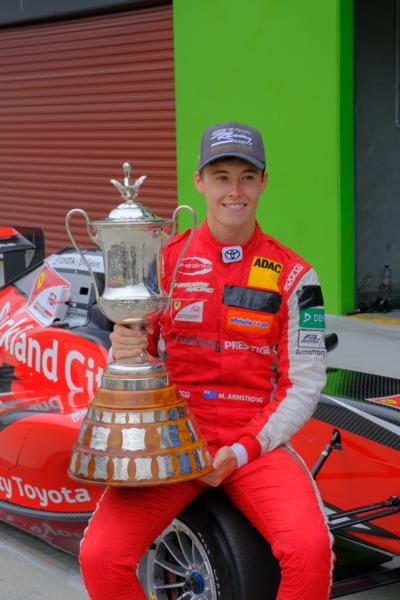 Christchurch teen race driver Marcus Armstrong has sprinted ahead of his rivals to take a commanding lead in the 2019 Castrol Toyota Racing Series.

As a result, going into the second ‘euro-style’ circuits of the five round championship, Armstrong says he has a good handle on his rivals and where they are weakest and is relishing meeting them on the 800 metre main straight and treacherous infield corners of Taupo.

‘I’m setting my sights firmly on the Championship now.”

Key to Armstrong’s dominance at Hampton Downs was his ability to hit the front of qualifying, judging the endurance reserve of his car’s Michelin slicks to perfection and banging down a sub-minute lap just as others were finding their grip compromised by high track temperatures.

From this point to the chequered flag of the New Zealand Grand Prix, says Armstrong, the championship will be won by the driver who qualifies best.

The six races held to date have been won by Armstrong, Lawson, Leitch and Artem Petrov. Armstrong is the first to win from pole in this year’s championship and has now done so twice.

Statistically, the leading five or six drivers at this point in the championship are those who have the best chance to take the crown, and often the points leader after Hampton Downs also takes the title. This year, one driver stands out from the rest and the battle behind him appears to be for the podium placings.