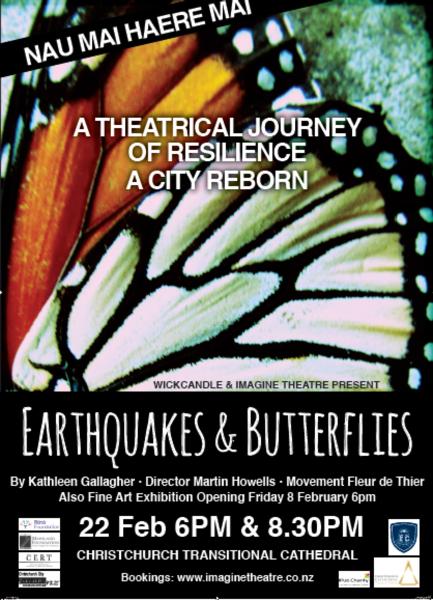 Earthquakes and Butterflies – A Theatrical Journey of Resilience

The eighth anniversary of the 22 February Canterbury earthquake will see a new adaptation of Kathleen Gallagher’s novel “Earthquakes and Butterflies” take the stage in the Christchurch Transitional Cathedral.

Imagine Theatre is presenting two performances on the anniversary of the quakes, commemorating the event which changed lives and the city forever.

Director Martin Howells, says the production is an opportunity for Cantabrians to acknowledge and reflect on the events.

“In 2019, the material has been reframed, presenting what we go through each anniversary as a ritual of remembering, focussing on community, and what and who we are becoming. I think it’s important for us to honour our journey over the last eight years, and value what has been lost while celebrating the emergence of the new.”

Howells has condensed the 2018 material, highlighting the poetic and universal aspects of author Kathleen Gallagher’s work.

“The shortened adaptation is a distillation of the myriad shades of humanity that were forever changed by the earthquake. It’s a tapestry of life and death beyond the individual, and I am sure members of the audience will see themselves and others in this production.”

Earthquakes and Butterflies draws on Māori mythology with some of the text in Te Reo Māori. There’s also a rich soundscape including live performance on traditional Māori instruments (Taonga pūoro played by Geoff Low) and violin. The six actors and musician bring the work to life with a dynamic physical score devised in collaboration with movement director, Fleur de Thier.

Notes for editors and reporters:

EARTHQUAKES AND BUTTERFLIES – A Theatrical Journey of Resilience