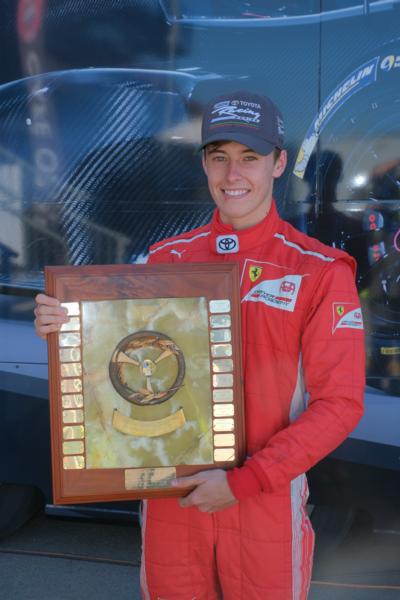 Armstrong takes top trophies, has his eyes on the prize CREDIT: Geoff Ridder

This weekend the 2019 Castrol Toyota Racing Series reaches an exciting conclusion at Manfeild near Feilding in the Manawatu, North island of New Zealand.

This year the championship story has been a pitched battle between Marcus Armstrong and Pukekohe's Liam Lawson. Two young drivers - teens both - putting New Zealand on the world motor racing map.

So who is Marcus Armstrong, our first ever inductee to the prestigious Ferrari driver Academy, graduate of the MotorSport New Zealand Elite Academy and recipient of the Kiwi Driver Fund assistance package for his TRS drive?

Marcus Armstrong’s career began in karting in 2007 at the age of seven and ramped up sharply to victory in the cadet national title in 2011 He was second overall in the 100cc Junior Restricted class at the New Zealand School Nationals. In 2012 Armstrong was juggling study with motor racing both in New Zealand and the USA, and winning the Kiwi 100cc Junior Restricted title.

In an impressive karting career spanning six years, Armstrong had amassed seven major category title wins and many podium finishes here and in the USA. Too young for TRS, he drove seven races of the inaugural Toyota Finance 86 Championship in 2013- 2014. Despite only contesting the second part of the season he finished eighth overall. Returning the following year, he raced the first three rounds, recording two outright wins and finishing seventh overall, winning the Rookie of the Year award. Armstrong topped his 86 career off with three races in the most recent championship, recording two podium finishes and one fastest lap. In 2016 his racing gathered momentum, the 16-year-old competing in European and world championship events in the intensely competitive KZ classes.

At the same time he began testing in a Formula Renault single-seater, then contested the penultimate round of the Formula Renault 2.0 NEC at the Nurburgring and at the final round for the British Formula 3 Championship. Though entered as a ‘wild card’ with the intention of simply gaining experience in single seaters, Armstrong was instantly competitive in fields of two dozen or more.

The following year (2017) he joined Prema PowerTeam and contested the German and Italian Formula 4 Championships, finishing second in Germany and winning in Italy. He was also fourth in TRS on debut that year, racing with M2 Competition.

In 2018 Marcus started his year by contesting the Castrol Toyota Racing Series, again with M2 Competition, and finished third.Following the conclusion of TRS he raced for Prema in the FIA European Formula Three Championship. He was competing against leading F3 racers including Mick Schumacher, Dan Ticktum and Jehan Daruvala and led the championship for several weeks mid-season, eventually finishing fifth.

In November 2018, Marcus was top rookie in the annual FIA Formula Three Grand Prix at Macau. He was the first of three drivers announced for Prema in the 2019 FIA Formula 3 Championship, which creates a new car blending GP3 and F3 technologies and will race on the Formula One calendar as a support event.