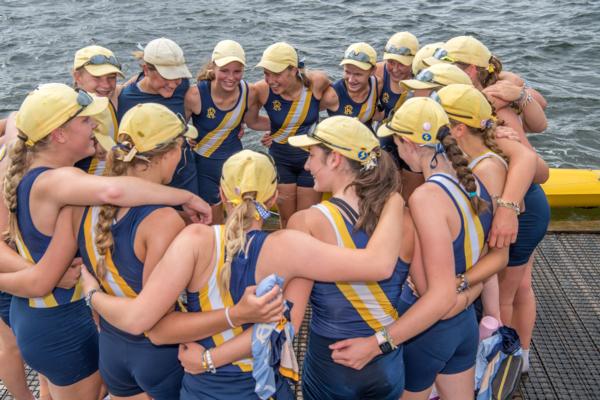 In one event, eighteen Rangi girls stood on the podium this year at New Zealand’s top school rowing regatta, which signals the end of the rowing season, and Rangi Ruru Rowing Manager, Ella Vink, says everyone involved can be very proud of their efforts.

“The novice eight event was particularly significant because at the end of the race, we had eighteen girls on the podium. Both our first and second crew showed grit and determination to pull that off,” she says. “In addition to our six medals and two titles, we have seven girls who have been chosen to trial for the Under-18 South Island team and that’s a great honour.”

Chloe Berge, Sam Vance, Rosa Jones, Kyla Otway, Tessa Reid, Charlotte Gray and Sophie Pye will trial over Easter, and if successful will compete at the North Island vs South Island Under 18 regatta at Lake Karapiro in April.

One of the most exciting races at Maadi this year was the girl’s novice U18 eight in which Rangi Ruru had two crews racing; both putting in a strong challenge for the gold, which was eventually won by Epsom Girls’ Grammar. The Rangi crew of Meg Crump (stroke), Abigail Reid, Katie Bond, Lilly Ellis, Primrose Porter, Leila Rhodes, Millie Bushnell, Maggie Craw and coxswain Jemima Porter, was just over three seconds behind the Epsom Girls’ crew. and took silver in a time of 7:00.44.

“The camaraderie and support shown to all the crews, from all the schools was as strong as ever,” says Rangi Ruru Rowing Coach Mark Cotham. “Of course, it is highly competitive and we all go out there to win but there was a palpable sense of togetherness particularly among the Christchurch schools this year and I am immensely proud of that.”