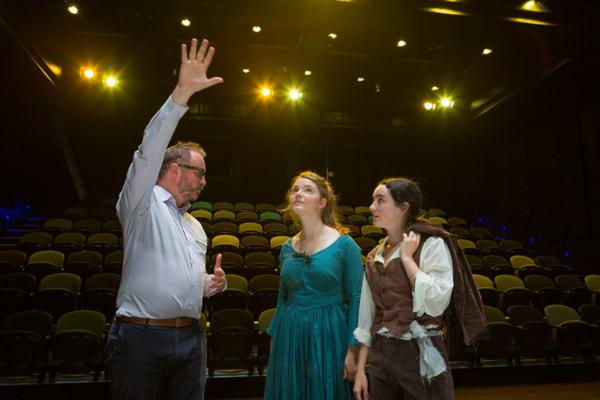 Lying somewhere between Dylan Thomas’s Under Milk Wood and the Ian Mune film Came A Hot Friday, Wheeler’s Luck is a raucous tale of the battle between preservation and development in a small rural sea-side community.

When local landowner, Nora Cox dies, leaving her prime coastal property to the people of the small town of Cox Point, Mayor Duncan Sanderson, enlists a developer to build a golf course and casino on her land. When local postie and environmentalist Sharon Dickle discovers that Nora left the Point to all the residents, she begins a campaign to preserve Nora’s place as a bird sanctuary.

A cast of twenty-six play forty characters, in this high-energy and entertaining eighty-minute theatre piece.

Year 13 student, Sarah Lawrence, who plays Lydia Cox, was accepted into the Court Theatre Youth Company at the end of last year and is the regional representative (for Canterbury) at the Sheilah Winn National Shakespeare Schools Production (NSSP) workshops and performances in September this year, in Wellington.

Yr 13 student and Head Girl, Rachel McSweeney, plays Johnny Wheeler however there are no “leads” in this production.

“It’s a true ensemble cast,” says Sarah. “No one character is on stage any more than another.”

Sarah says the time commitment from everyone is significant, including rehearsing during the recent school holidays. With her involvement in a number of orchestral groups, it’s a wonder she has enough hours in the day to do all she does.

“I don’t sleep much,” she laughs. “I would rather be doing this during the holidays though; it’s what I love.”

Rangi Ruru’s Director of Theatre Arts, Peter Rutherford, says presenting New Zealand work is important to him and the students.

“We hear our own voices, see our own history and characters,” he says. “I think that’s really important in a world full of things from other countries thousands of miles from New Zealand. That’s not to say there isn’t a place for work from overseas but we have such great material written by Kiwi’s and about our own country; we should share it as much as possible.”

The production opens on Wednesday 15th May and runs for 4 performances until Saturday 18th May, 7.30pm at the Merivale Lane Theatre. This show is 80 minutes long with no interval. Contains some coarse language.

Tickets available on the Patronbase website or go to www.rangiruru.school.nz