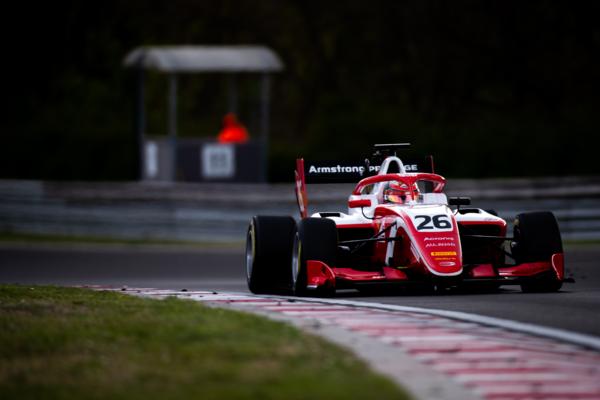 With more power and speed and more aerodynamic grip comes an adjustment for each driver in the championship – braking points into corners are different, the ‘feel’ of the car as downforce unloads is a trap for the unwary, and the mass of the car is a test of stamina.

But Armstrong says his greater challenge is the unknown: when the F3 cars go out on the 4.655 km Circuit de Catalunya, he goes up against 29 racing stars in the making. Some of these drivers are familiar – in particular his team-mates, Jehan Daruvala and Robert Shwartzman – but others are less well known. The F3 Championship races this year at selected round of the Formula One World Championship. It sets a series of new benchmarks and this year becomes an embedded part of the FIA’s career growth strategy, masterminded by F1 great Gerhard Berger.

With a successful GP3 transitional test and three Formula 3 tests behind him, Armstrong says he likes the new car, which brings together the best of GP3 and Formula 3. Though he consistently set times in testing that were at the top of the timesheets his big focus now is on the essential sessions leading into this weekend’s two races.

“Winter testing is pretty irrelevant to the championship. What counts is setting a good qualifying time that puts us in a strong position for the racing,” he said.

Armstrong said adapting to the increase in power and grip hadn’t been a problem. The new car is ‘quite fast’ – and the aero grip was a pleasant step up from the old Formula 3 cars.

“The engine and aero are really a big surprise to be honest. The only thing that makes life difficult in this car is the weight, which is just under 700kg.”

Some of the grid will not have found the transition from their 2018 drives easy. One key difference this year is in the Pirelli tyres, which have been designed with a measure of early degradation that will reduce cornering grip.

Drivers must re-think how they treat their tyre preparation in qualifying and then how they manage them for maximum grip in races.

“That creates a lot of opportunities.”

The transition from GP3 to new F3 has enabled designers and tyre suppliers to arrive at a 2019 car that is more raw and more challenging to drive than either of the designs that inspired it.

“We have a good package. Obviously the car is new to everyone so we are all working hard. The main thing is I feel confident and comfortable.”

The Championship appears at the following rounds of the FIA Formula One World Championship. In New Zealand, television coverage is available as part of the Formula 1 coverage package on Spark Sport.

Each circuit name below hyperlinks to information about the track.