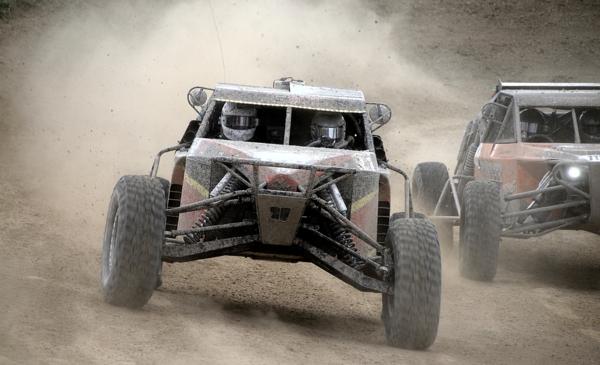 The second round of the 2019 New Zealand Offroad Racing Championship, the Woodhill 100, has attracted a record field of the spectacular ‘unlimited’ class one race cars in an entry that shot past 70 cars last week and could reach the limit of 100. The race will reward some and shatter the dreams of any who underestimate its challenges, according to offroad racing national president Martin van der Wal.

“The Woodhill 100 is the fastest, toughest and often the shortest event in New Zealand offroad racing. It chews up and spits out some of the best drivers and race vehicles in the sport. Racers need to come to this one prepared for a full day of flat-out racing and severe punishment on some of the toughest tracks in the championship,” he said.

Leading the class and seeking a record seventh Woodhill 100 win is Manukau racer Tony McCall in his Chev powered BSL single-seater. Likely top challengers in the class include Karl Fenton who gave his immaculate Concrete Motorsports Jimco Chev a debut win at the opening round, then rolled the car in the second of three heats; along with Alan Butler in a Chenowth Millennium recently upgraded to V8 power. Dan Fisher is coming north from Nelson to race, leading a pack of southern raiders that include Owen Chang, Donald Preston, and newcomer Alex Bright. The class also features its first female competitor in years, Davena Fraser in husband Mike’s single-seater Toyota V8 race car.

After a temporary hiatus caused by a cyclone, the Woodhill 100 is back in the deeps of the pine forest with the same name. Once again sponsored by North Harbour Vehicles, 'the 100' is “a dream event, a bucket list event” and a highlight of the championship calendar year.

“And to have this massive wave of top race cars thundering off from the start is going to be incredible,” Mr van der Wal said.

Also in the mix are the JG Civil UTV race cars, with defending champion Carl Ruiterman readying his new modified (S Class) Yamaha for battle. There are 13 modified UTVs including Ruiterman and category sponsor Joel Giddy, who are equal on points for the class.

Like the race car and UTV categories, the 4WD Bits four wheel drive/truck classes are strongest in the glamour modified/unlimited class. Currently leading the class is Whakatane’s Mal Langley in a four wheel drive Chev engined Toyota Tundra. He will go up against Drury racer Nick Hall in a Toyota Hilux ProLite, also with Chev power. The others currently entered are Russell Vare (Manukau), James Hayes (Auckland), and Palmerston North’s Grant Rosenburg.

A week out from the event, Gerrad Chitty has entered his Toyota in class four for modified production trucks; Warren Adams and Brendon Robbers had enteres class six for winch challenge-style rtace truck.

Of the seven, Howard, Chitty, Adams and Hook have entered the Woodhill.

The Kiwitruck youth category sees four racers fronting up in J class and another three in M class.

The 2019 Woodhill 100 takes place on Sunday June 2. Racer and spectator access is at the southern (Muriwai) end of the forest, with racing due to start at 11.00 am. Spectator admission is $10 per person.