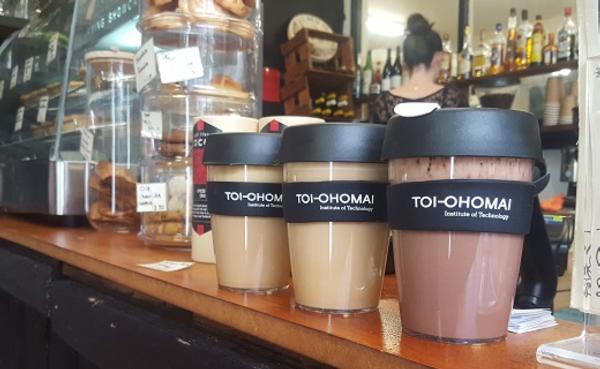 Toi Ohomai Institute of Technology is escalating its efforts to get rid of all single use coffee cups on campus this month.

Typically made from paper lined with plastic that can’t be recycled, the World Economic Forum claims single use cups are killing the environment. It’s estimated between 100 and 200 million disposable cups are used each year in New Zealand, with just 0.25 per cent being recycled.

Toi Ohomai has removed single use cups from its campus kitchens and staff rooms, and recently announced a further initiative to remove disposable coffee cups from the Melting Pot Café on its Mokoia Campus in Rotorua by 24th of June. The initiative started this week to coincide with World Environment Day.

Café Manager Vanessa Dunn says she is very excited about this new initiative and is happy that the general response to this change has been positive.

“We’re very excited about this and it’s been great to see the students and staff get on board. We put a countdown notice on the till to give our customers a chance to get used to the impending changes.”

Vanessa says the cafe, which is open Monday to Friday, serves up to 1250 takeaway coffees a week and the majority of those cups are discarded.

“Most people don’t know that disposable cups are part of a major problem – many of them can’t be recycled because they are lined with plastic.

“There is also a significant environmental cost in manufacturing disposable cups. As for compostable disposable cups, although it seems like an obvious option, most don’t hold liquid properly, not to mention that it cannot be composted without the correct facilities.

“People are getting used to bringing their own bag to the supermarket and this is just like that. The whole purpose of the initiative was to reduce rubbish and encourage more people to reuse rather than recycle.”

For customers wanting a takeaway, the cafe is offering an option to either bring their own cup or use the available cups. Vanessa says by using the sustainable options, customers will  be eligible to enter a competition where they can win  product gift packs sponsored by GoodFor, OGO Rotorua, The Rubbish Whisperer, Neat Natural

Products and Enhanced Health NZ. One winner will be picked every Friday.

“We’ve also set up the Swap a Cup membership programme, where customers can pay $10 a term to rent a cup, supplied by Cuppa Coffee Cup,” says Vanessa.

This initiative forms part of a Toi Ohomai’s commitment to become a sustainable organisation as part of its 2020 strategy.

During 2018, the Institute developed its inaugural sustainability framework and in October the Kaitiakitanga: A framework for Sustainability at Toi Ohomai was approved by its Council.

Reducing waste was identified as one of three organisation-wide tactics to achieve the goals set out in the strategy and is part of a step-change approach to promote sustainable practices across the organisation.