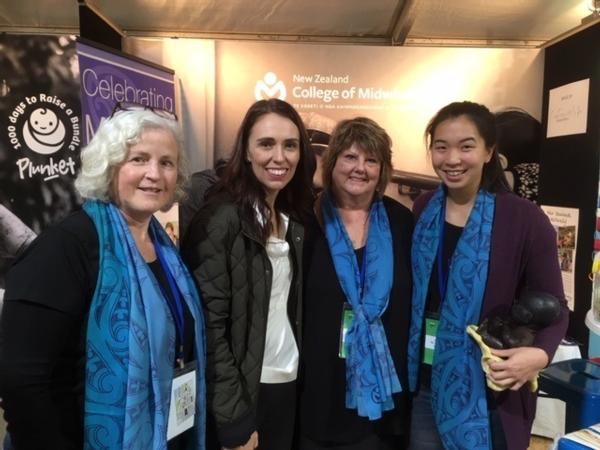 A new mum popped in to meet the midwives at Fieldays today.

The Prime Minister, Jacinda Ardern, chatted with midwives late this morning then headed away with a gift from them including a condom, a pregnancy kit and a lollipop.

Midwife, Liz James, says she was really interested in what midwives do.

“We told her about what our role is in rural New Zealand, the amazing women we work alongside and how our service needs to be resourced more appropriately,” says Ms James. “We talked about rural maternity units (something we are hearing about in the media a lot right now) and emphasised how important they are in keeping midwives in the area. As primary units are downgraded or services are removed, the workforce moves away – these issues are inextricably linked,” she says.

Ms James says the PM was really interested in hearing about what midwives do and the key role they play the positive outcomes women and babies experience in New Zealand.

Midwives play a vital role in the health and wellbeing of rural communities throughout New Zealand and the thousands of people who flock to the country’s premier agricultural show, have this week had an opportunity find out more about their work.

Alison Eddy, Chief Executive of the New Zealand College of Midwives says, “We know how much New Zealand’s midwives are valued by the families they work with, day in, day out. Last year 23,000 people visited the Health and Wellness Hub at Fieldays and this has been a great opportunity for us to meet people face-to-face to explain our work.”

All aspects of midwifery care have been on show at the Health and Wellness Hub at the New Zealand College of Midwives stand at Mystery Creek near Hamilton from Wednesday and finishing tomorrow.

Midwives from the local Waikato region have “womaned” the College stand together with midwifery students from the Bachelor of Midwifery degree course at Wintec in Hamilton.

The College’s stand has presented a range of equipment used by midwives in their work including pregnancy testing kits, and anatomical models used by midwifery educators to teach students about the birthing process and care during pregnancy and labour.

Midwives have talked with members of the public about the unique role they play in the lives of women and families, and the education required to become confident, competent professionals who are experts in normal birth. The College team also spoke with women who are interested in becoming midwives.

The College’s stand showcased the primary birthing units – where women with normal, healthy pregnancies receive midwife-led care during labour and birth – in the Waikato region. There was also information on how to find a local midwife for pregnancy care through the College’s online locator service, Find Your Midwife.