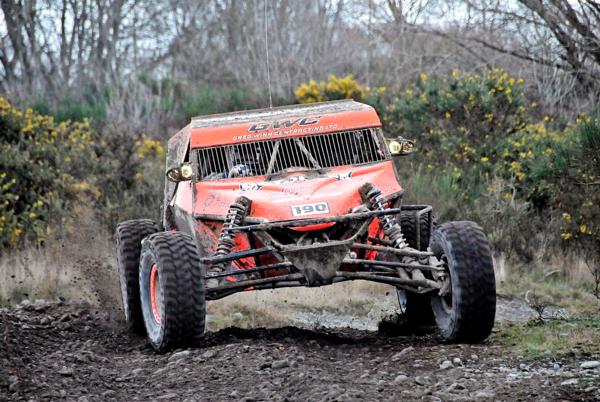 Fog, bitterly cold mornings and rocks the size of pumpkins no deterrent to Greg Winn.

Nelson’s Greg Winn has taken a popular victory in the Mainland Challenge endurance race at West Melton south-west of Christchurch.

The 250 km enduro was the second day of racing after a chilly programme of stadium heats at West Melton on Saturday; the stadium almost put paid to Winn’s racing after a crash damaged his front suspension and steering.

A frantic race to make repairs got the big orange Scorpion car to the start line the next day. But a last minute engine issue forced Winn to start from the pits after the field had already entered the nearby forest.

In an epic drive that started in the pits and ended with the trophy, Winn made up for missing the previous day’s stadium racing, powering through the 32-strong field on the rocky forest tracks and setting fastest time of the day.

The enduro began as a battle between pole man Brendon Midgley and Ian McFedries in a fast and agile Can Am running in JG Civil S class.

Midgley had set fastest lap on Saturday to take pole for the Sunday, but his lead lasted less than a lap and his race was done after three laps, the car parked off the track with damaged front suspension mounts.

Ian McFedries had the briefest glimpse of the lead before Nelson’s Nevil Basalaj carved through from fifth overall to also hold the lead briefly. He then shot up a tree and was stranded until towed out by Ron Crosby in his standard-class Mistubishi Pajero.

Dyson Delahunty had won all three of the Saturday heats for JG Civil U class UTVs and put in a magnificent charge the following day but had a hub nut shear off on lap five while in line for a top five finish.

From the fourth lap, though, the race lead had been ‘owned’ by Winn, who was up to three minutes faster per lap than his rivals. Though Mike Fraser was first on the road, Winn’s charge swung the battle his way.

When Fraser stopped for a ‘splash and dash’ refuel with the white flag about to be shown the race was Winn’s and he made no mistake, firing the bright orange race car over the finish line in a total elapsed time of 3:27.59. He set fastest lap on the rocky, twisty course, a 20:23.264 on lap four.

Fraser came home second on corrected time, and with class victory in the previous day’s stadium racing at West Melton he also won the class and the weekend outright.