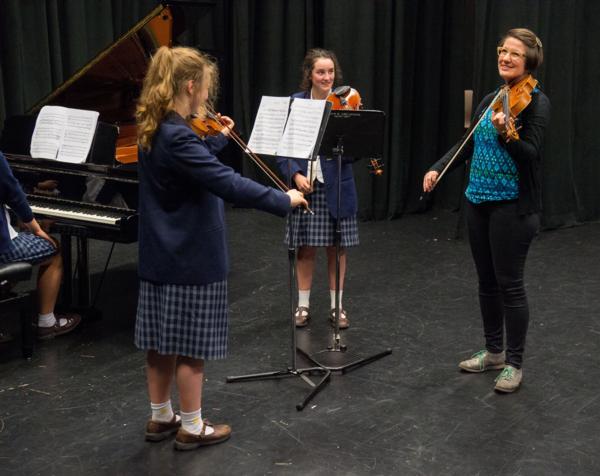 Rangi Ruru Girls' School alumna  Bryony Gibson-Cornish is a member of an emerging London-based string quartet that has been awarded the top prize in a prestigious international music competition.

The Grand Prize winners of the 2019 Bordeaux International String Quartet Competition were announced last week, and the Marmen Quartet, of which Gibson-Cornish is a member, was announced as a joint winner, along with Simply Quartets. The prize includes €20,000 (NZ$34,284) and a three-year international tour.

This will launch Bryony, and her quartet, formally onto the world stage in the highly competitive world of professional chamber music. The immensely talented 26 year old was a music scholar at Rangi Ruru between 2006 – 2009.  On leaving, she studied viola and voice at the University of Canterbury, after which she won a Fulbright Scholarship, along with several others, allowing her to study for a Master of Music degree in Viola at The Juilliard School in New York.  Bryony then relocated to London to study for her Artist Diploma at the Royal College of Music, where she was awarded the Tagore Gold Medal upon graduation. Throughout her years of study, Bryony has been awarded many prestigious scholarships and awards.

Based in London, Bryony was also recently appointed No. 2 Viola with the London Mozart Players, the UK’s longest established chamber orchestra. In addition, she freelances with other orchestras, each job taking her all over the world, and is a teaching assistant to her former Professor at the Royal College of Music.

Bryony has kept in touch with the Music Department at Rangi Ruru, and has been back to assist with chamber music coaching and mentoring several times, including a week-long residency in 2017.

“My time at Rangi set me up to have the ideal mindset as a musician forging a career path overseas. Not only did I love spending time in the music department singing and playing any instrument I could get my hands on, but the school atmosphere was so encouraging and inspiring - I really felt like it was possible to aim for the stars. I am incredibly proud to represent Rangi and New Zealand on the world stage and I look forward to continuing my involvement with the amazingly talented musicians in the music department.”

Director of Music at Rangi Ruru, Janet Kingsbury, says the school is very fortunate to have a former student achieving at the international level that  Bryony is, who is still so connected with the faculty.

“We are very proud of her, and I know the girls who continue to learn from and be inspired by  Bryony are too,” says Mrs Kingsbury. “We wish Bryony all the very best and hope her working relationship with Rangi Ruru continues for many years to come.”