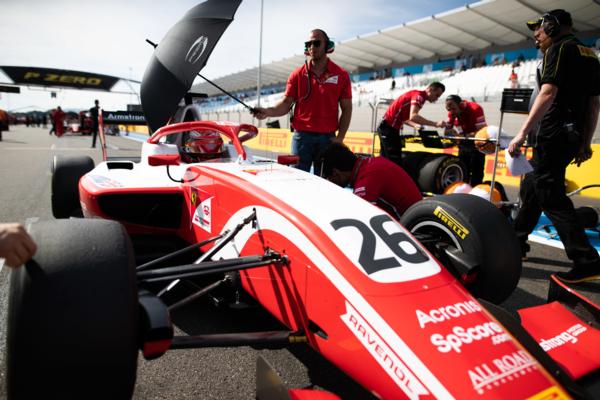 Armstrong bruised and battered, but third in the championship

New Zealand driver Marcus Armstrong is a step closer to the lead in the 2019 FIA Formula 3 Championship after the second round, held during the French Grand Prix weekend at the Circuit Paul Ricard, Le Castellet.

It was a bruising affair for the young Kiwi.

Race one didn’t go as planned. Having qualified well, he dashed forward as his team-mate Jehan Daruvala did battle with Jake Hughes for the lead and put the British driver into P2.

Then a tussle between Hughes and Armstrong took both off the track. Hughes, behind Armstrong and another Prema driver, Robert Shwartzman, attempted a win-or -bin dive down the side of both. The three cars were heading into a left hand corner where Hughes’ move couldn’t possibly succeed, and his front right tyre hit Armstrong’s left rear as the latter turned through the apex of a corner.

The two cars spun off the track.

Hughes was not penalised for his rash move, and Armstrong went on to finish fifth.

In the second race Armstrong experienced a troubled start as his car stalled from third place on the grid, but his race was no less outstanding.

"I did my normal procedure at the start, exactly the same, but for some reason, it stalled at the launch which had never happened to me before. After that, the race was good. I was quite conservative at the beginning, but then at the end, I was really fast. We fought through the field well, got the fastest lap and fifth place from P25. I can't complain about that but, in my opinion, it should have been an easy win."

He is the first driver to complete such a charge through the field, a feat the more remarkable because it was completed under racing conditions – there were no safety car periods or restarts to bunch the field and make his attack easier.

The 18-year-old New Zealander stormed back to the fifth place, securing a points finish which also contributes to PREMA Racing's hefty lead in the team classification.

Armstrong’s Prema team now locks up the top three spots in the title hunt: Shwartzman leads with 70 points ahead of Daruvala by 12 points. Armstrong, who arrived at the second round fourth overall, now climbs to third with 37 points, ahead of Jüri Vips on 32 and Piquet on 27.

Prema tops the teams’ standings with a mammoth haul of 165, ahead of ART Grand Prix by 115. Trident sit third on 41, ahead of Hitech Grand Prix on 32 and MP Motorsport on 16.