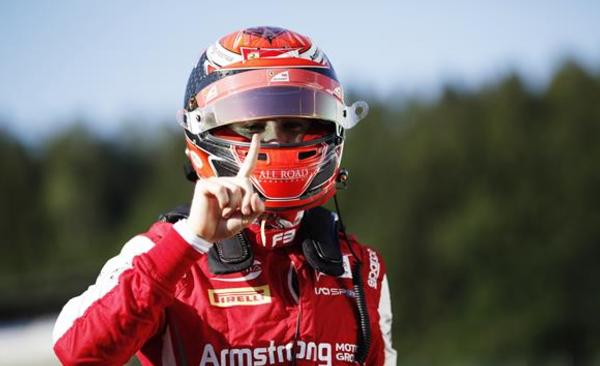 Marcus Armstrong has taken pole for today’s FIA Formula 3 race at the Red Bull Ring. The Christchurch (NZ) born racer topped the timesheets in free practice and then went out this morning (CEST) and did it again in qualifying.

Armstrong looked the class of the field early on, establishing a lap time strong enough for pole before the drivers headed out for final efforts late in the session. He was lining up a further push late in the session, but was temporarily stymied when Logan Sargeant crashed into the barrier at the final turn with just over four minutes to go.

When the circuit went ‘green’ again, Armstrong established and maintained his place at the top of the timesheets as the field battled for the minor positions. He backed up his free practice performance with a 1:19.716 in qualifying and taking his first pole of the season.

“I’m really really happy to get the first pole of the season, especially because it’s been way too long since I’ve been on pole in Europe. The car was really good and I felt absolutely comfortable with the first set. It was a shame for the red flag because I was on another very good lap, and it would have been even more special. But anyway, it’s pole!”

Earlier, free practice set the scene for the sensational qualifying dash. In the free practice session the Prema driver set a lap time of 1:19.396 for the 4.318 km circuit.

After ten minutes the three Prema drivers – Armstrong, Jehan Daruvala and championship leader Robert Shwartzman – took to the track and set about demolishing the times set by the early runners.

British driver Jake Hughes had shown impressive pace at round two in Le Castellet last week and was looking to continue this form as he broke up the all PREMA front three to sit second behind Shwartzman.

With five minutes to go the Prema trio were under attack, Pedro Piquet going fastest and demoting Shwartzman and Daruvala – to eighth and ninth.

In a run that is becoming a classic Armstrong ‘signature’, he then put in a laptime of 1:19.396 to steal P1 at the death.

Armstrong, currently third in the championship, starts from pole for the first of two Formula 3 races this weekend. The second is a partial reverse grid based on the first race.